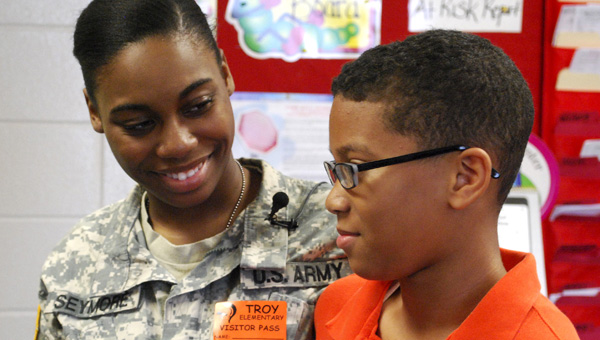 Jazmen Seymore and Aaron Kelly talk about seeing each other for the first time in more than six months. (Photo/Robbyn Brooks)

It was just like any ordinary day in Ms. Allison Cotton’s fifth-grade classroom at Troy Elementary School.

Cotton passed out an exam and the only sound made in the room was the quiet shuffling of papers and the brush of tennis shoes against carpet.

But just before 2 p.m., Cotton went out into the hallway and came back in with a huge surprise for one of her students.

Aaron Kelly was sitting in the front row and raised his head, his eyes meeting his 21-year-old sister’s as she walked into the room. He didn’t make a sound and only widened his eyes. Then she rushed to his side and wrapped him up in a warm hug.

Jazmen Seymore has been separated from her family for more than six months while she was stationed with the U.S. Army in Germany. While there, she was deployed to Kuwait.

Her return was a shock to Kelly, 11. Only his mother, Cotton, and a handful of others knew Seymore would be home Monday.

“I am very good at keeping secrets,” said the pair’s mother Sophia Austin. “I love secrets.”

But big, warm-and-fuzzy secrets are hard to keep.

“It nearly killed me keeping the secret all day,” Cotton said. “But I knew it was going to be so special.”

For the time she was away, Kelly’s communication with his sister was short.

“We talked over the phone,” Kelly said. “Basically it was short talks.”

Austin said she was proud of her children, and their tight friendship. And she beamed when she discussed her daughter’s dedication to serving the United States.

“She never went away to sleepovers,” Austin said, wiping tears from her eyes. “I am so proud of her and her serving her country and being gone for long periods of time. When she first went off, it was hard.”

Cotton said she was happy to have the reunion take place in her classroom.

“The children need to be exposed to someone as dedicated as this,” Cotton smiled. “It is special for all of us to meet her.”

As for the rest of the day, Seymore hoped to meet her 5-month old niece for the first time and enjoy a warm meal from an American favorite.

Seymore said she joined the service for educational purposes, but had always wanted to be in the Army. She’ll be home for 30 days before her next assignment in Virginia.

“I enjoy serving my country and I will continue to do so,” Seymore said, her arm around her brother. “Thank you all for your support.”