Tell me a story 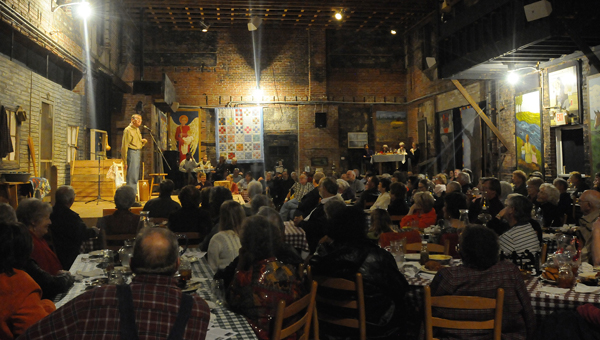 There’s something nostalgic about a gym full of elementery school students sitting in front of a stage listening to someone tell stories.

The students of Goshen Elementary got to experience the musical and prose talents of Troy native Brent Holmes on Friday as part of the Pike Piddlers Storytelling Festival. Holmes will be providing music for the festival today.

The festival began with the school visits on Friday and included a Friday night performance at the We Piddle Around Theatre in Brundidge. Three performances are scheduled for today: 10 a.m., 2 p.m. and 6:30 p.m. at the Trojan Center Theater on the Troy Campus. In a prelude to this weekend’s events, Holmes led the students, over 100 in all, in sing-alongs, played on a mixture of the ukulele and the guitar and drew laughter and applause from the delighted students.

Holmes led several songs during the show, including several tropical-themed sing-alongs that allowed the kids not just to listen and laugh but get involved by calling out lines and suggesting dialogue.

“I thought they were very well mannered and attentive students,” Holmes said. “I played at two schools in Banks earlier today and so far I’ve been impressed nobody has been rowdy and everyone seemed to have a good time.”

After the songs, the kids had a chance to ask Holmes more questions about his music and storytelling, as well as what instruments he plays and how he got started.

Holmes then finished his performance with a true story about his time in Alaska, working for the forestry services and seeing his first wild bear.

Holmes and many other storytellers and musicians will be performing at all three performances today.

Tickets are $10 for the day performances and $15 for the evening performance and are available at the door.

“I’m grateful they started the storytelling festival,” Holmes said. “It’s a great cultural event and I hope it can continue. The South is full of stories and we need to make sure that they are preserved and emphasized.”