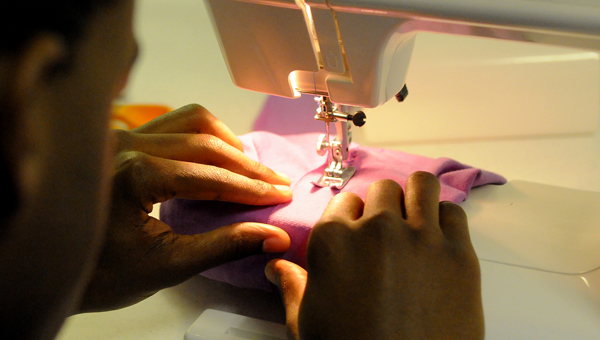 For nine years, the Global Studies dual enrollment class has been making chemo caps for patients who are undergoing cancer treatment.

It has always been a special project for the students but never so much as this year.

“We’re all looking at this project in a different way now,” said Lance Johnson, who cast a glace across the room at Tammy Powell, who was wearing a baseball cap with the wording, “I’m having a no hair day.”

“I’ve known Mrs. Powell all my life,” Johnson said. “That makes what we are doing even more important.”

Powell retired a year ago and before she could really begin to enjoy the fruits of retirement, she was diagnosed with breast cancer.

Chemotherapy treatments caused her to lose her hair but she has faced the illness and her “new look” with courage and confidence.

And, that has not gone unnoticed by the young people she continues to mentor.

She was there to assist Phyllis Wilson’s Global Studies class when they set up the sewing machines to make chemo caps on Thursday at the Pike County Extension Office.

“Making the chemo caps has always been something that was important to us but it has really hit home to us now,” said Liberty Kilpatrick. “We knew that the chemo caps were going to people that had lost their hair because they were going through cancer treatments but, this time we know someone. Mrs. Powell has done so much for us and in a way, by making these chemo caps, we are doing something for her.”

Powell will take the chemo caps to the oncology center in Dothan where she has undergone chemotherapy and is now schedule from radiation treatments.

“I know now how much these caps are appreciated,” Powell said. “I wear one often because they keep my head warm. It’s not a vanity thing. It’s a comfort thing. I always wear one at night because, if I don’t, I get chilled.”

The caps are made of double knit that’s not easy to find now and the pattern is simple so even those who can hardly thread a needle can sew one up.

“The Global Studies class worked really hard and made about 20 caps,” Powell said. “For some of them, this was their first time making the caps. Those who are in their second year in Global Studies have made the caps before and were a big help to the others.”

For the Global Studies students, making chemo caps was something they could do for cancer patients whose names and faces they didn’t know.

But, for the lady wearing the baseball cap, there was more they could do.

“I know that many of them prayed for me and still pray for me,” Powell said. “When you go through something like this and people are praying for you, you can feel it. I have felt their prayers in my life and they have given me the strength that I needed.”

And, unknowingly, Powell has given the young people she has mentored the gifts of understanding and compassion.

But the students who gathered around Powell to make chemo caps for cancer patients didn’t seem to notice that she, too, was having a “no hair day” and not a one of them was uncomfortable in her presence.