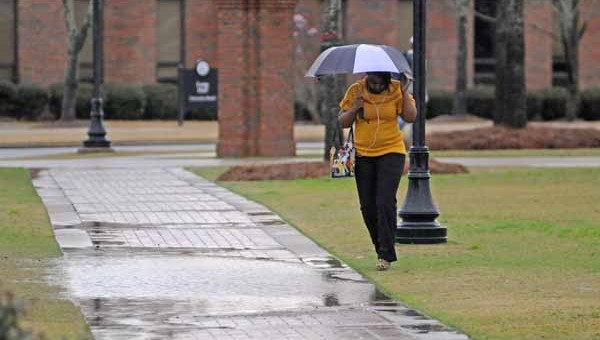 A student avoids a puddle while walking to class on the Troy University campus in Troy, Ala., Thursday, Jan. 26, 2012. (Messenger Staff Photo/Thomas Graning)

One man, still unidentified, was killed in a wreck Thursday afternoon during the height of the day’s severe weather in Pike County.

Dark clouds and gusting winds encompassed the area for most of the morning with patches of light rain occasionally falling. About 1:30 p.m., heavy ran began cascading down.

It was about the same time as the first hard rain that sirens began to ring out in response to a motor vehicle accident on the Henderson Highway.

A black male in an older model light blue Ford Mustang crashed into a tree, demolishing the passenger side of the vehicle. The vehicle tag was from Pike County.

First responders had transported the driver from the scene by 2:15 p.m. He was breathing, but unresponsive. Trooper James Eubanks said the driver was pronounced dead at the hospital, but circumstances around the wreck were currently unknown.

The driver’s name was withheld, pending notification of his family.

Around 3 p.m. a Montgomery television station meteorologist reported “weak rotation” over Troy, but no warning was issued.

It was business as usual on the Troy University main campus Thursday afternoon, with students soggily trudging to classes. But the Dothan and Fort Rucker sites cancelled classes. The City of Troy offices also remained open, although afternoon board meetings were postponed.

The heaviest downpour over most areas had dissipated by about 3 p.m., but consistent showers continued in spurts. The tornado watch was called off early, ending about 3:36 p.m.

The brief severe weather threat for Pike County left the area fairly untouched, unlike the 10 tornadoes that touched down in Perry and Chilton counties on Monday. The National Weather Service reported an EF-2 that created a 40-mile path of destruction.

Two people died when an EF-3 touched down in St. Clair and Jefferson counties.

Showers and thunderstorms were expected to continue throughout Thursday night, with Friday being mostly sunny, according to the NWS.