The rain was coming down in sheets, the wind was swirling and thunder could be heard in the distance. But, not a single person left their place outside the packed storytelling tent.

Mernette Bray of Troy has vivid memories of her first visit to the National Storytelling Festival in Jonesborough, Tenn. She remembers thinking how crazy she must be to stand out in a rainstorm to listen to somebody tell a story.

But that “someone” was Donald Davis.

“There were 1,200 listeners inside the huge, circus-like tent and hundreds of others crowded around the outside,” Bray said. “I probably would have left but I was with friends who were determined to stay, so I stayed.”

And, that’s when Bray got hooked on storytelling.

“I could sit and listen to Donald Davis all day long and never get bored,” she said. “I’ve heard him dozens of times over the years and I still want to hear him again and again.”

Davis will be one of four master storytellers who will perform at the Pike Piddlers Storytelling Festival this weekend at the We Piddle Around Theater in Brundidge and the Trojan Center Theater on the campus of Troy University.”

Joining Davis will be Bil Lepp and Kevin Kling, who are return tellers at Jonesborough, and Suzi “Mama” Whaples who caused quite a stir at her debut at the National Storytelling Festival.

“Donald Davis will be back for the sixth year so that tells you how popular he is,” Bray said. “Kevin Kling and Bil Lepp are both back by popular demand.

“Every year 12,000 people and more from all across the country go to the National Storytelling Festival and nearly every one of them will want to see Bil Lepp and Kevin Kling. They pack the tents just like Donald Davis did the first time I was at Jonesborough and still does.

Bray said Whaples has made a name for herself at major storytelling festivals around the country and the sponsoring Brundidge Historical Society is excited to have her.

Annette Bryan, a member of the BHS’ storytelling committee, said every time she hears Donald Davis it’s like the first time.

“I don’t care how many times Donald Davis tells a story, you will be greatly entertained,” she said.

Bryan said Lepp has the same ability to catch and hold the attention of an audience.

“He can tell a wild tale and make you believe it,” she said, laughing.

Lepp is a six-time winner of the West Virginia Liars Contest and he’s sure to tell some tall tales this weekend.

Kling was born with a shortened left arm and lost the use of his right arm in a motorcycle accident but that doesn’t keep him from weaving magic with words.

“He tells stories – true stories – of hopping freight trains, getting hit by lightning, performing his banned play in Czechoslovakia, growing up in Minnesota and eating things before knowing what they are,” Steed said. “He is right up among the master storytellers.” 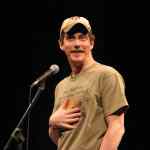 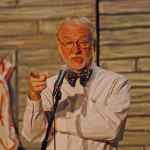 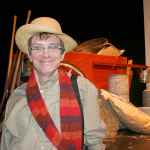 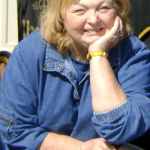 Whaples is “our kind of folks,” Steed said.

“She tells hilarious stories in her Appalachian dialect and that’s not a whole lot different from the way we talk so we’ll be right at home with her.”

Steed said the 2012 Pike Piddlers Storytelling Festival will be one of the best ever.

“Every year, we don’t think the festival can get any better and it’s hard for it to be better. But every year it’s just as good as the year before,” he said. “When we were thinking about having a storytelling festival, storyteller Sheila Kay Adams said, ‘If you ain’t gonna do it right, don’t do it.’ So we try to do it right and that means bringing the best storytellers we can find to the stage.”

The Pike Piddlers Storytelling Festival will kick off to a sold-out audience on Friday night at the We Piddle Around Theater and continue with three storytelling concerts at the Trojan Center Theater on Saturday.

Tickets are available for the 10 a.m. and 2 and 6:30 p.m. concerts at the Trojan Center Theater on Saturday. Each concert features all four tellers. Preshow music begins 30 minutes prior to the storytelling concerts.