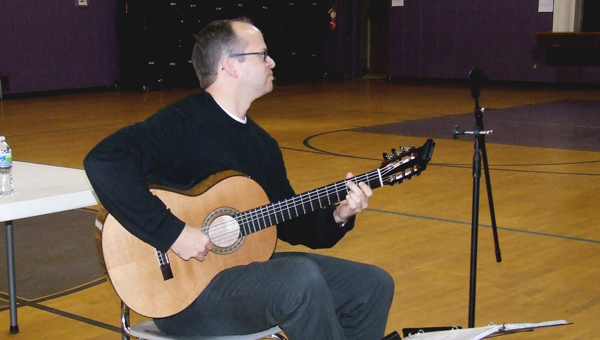 Little mouths formed into O’s and young eyes stretched into exclamation marks as students at Pike County Elementary School discovered a guitar can sound just like a piano.

Manderville introduced the students at PCES to the classical guitar and selected repertoire from the Renaissance period to Modern times.

“On a classical guitar, you can play classical music, rock ’n roll, blues, country and jazz.

However, Manderville told the students that the guitar was not originally so versatile.

“Years ago, the guitar was not played in public. It was only played in the living room,” he said. “The guitar didn’t have a place in the concert hall.”

But that changed in the 20th century when music written for the cello was transcribed for the guitar by a Spanish composer.

With the classical guitar “going public,” the students were told that the versatile instrument now can be heard on ipods and YouTube, in elevators and at country music jamborees and anywhere in between.

“You can play different styles of music on the classical guitar,” Manderville said. “Beating on the guitar gives it the sound of drums. The classical guitar can be played like an orchestra because it can do so many things.”

Manderville demonstrated how the classical guitar can duplicate the sounds of the  ringing of a bell, the approaching of footsteps, the unlocking of a door and the creaking of a door as it is opened. Again, little faces made circles and exclamation marks.

“The students have really enjoyed this performance,” said Anita Grant, PCES principal. “I could tell by the questions they asked Mr. Manderville. They were very attentive and interested. We appreciate the Troy Arts Council making this opportunity available to them.

“How many of them would otherwise get to see a classical guitarist perform?  Not only did Mr. Manderville play for them and demonstrate the different ways a classical guitar can be played, he also taught them about the history of the instrument.”

And, Manderville impressed upon the children that to be good at anything, it takes dedication, patience and a lot of practice,

“I was 9 years old, he said. “I practiced eight hours a day many times.”

To that, eyes widened and mouths dropped and little hands clapped in earnest appreciation. Manderville directs the classical guitar program at Carver Elementary Arts Magnet School. He is on the faculty at both Troy University and Huntingdon College. He also performed for the students at Banks Schools on Tuesday.