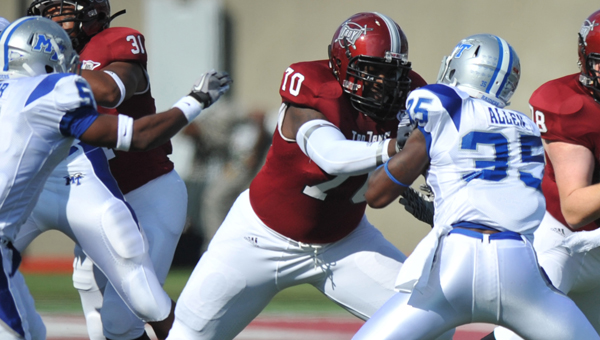 With the college football season over and a champion decided, the best senior players in the nation are converging on Mobile for one more –– the Senior Bowl.

Among them is Troy University offensive lineman James Brown, the only member of the Trojan squad invited to attend.

Brown, who has started every game at Troy since 2009, will get to play alongside top players from around the country including Marquis Maze of Alabama and Kellen Moore of Boise State.

“It’s a really great experience to play with so many great players,” Brown said. “It’s an honor to be invited and it’s a lot of high expectations to carry and represent the Trojan name.”

Brown was named first team All-Sun Belt Conference in 2011, and finished the year with an 87 percent grade on 878 snaps and a team high 110 knockdown blocks.

He was equally effective in his first two seasons as well, leading the team with 66 knockout blocks in 2009 and being named second-team All Sun Belt Conference in 2010.

As far as the Senior Bowl is concerned, Brown sees it as a chance to learn from some of the best in the business.

“I feel like the best part is being able to mingle with the other players and coaches from the other schools and learn what I can from them,” he said. “I really don’t know what to expect, I’m just going to play and do my part and hope for the best.”

Brown will finish his time at Troy in May when he graduates with a degree in criminal justice, capping off a three-year Troy football career that included 20 wins and two bowl appearances.

“I want to thank Troy for giving me the opportunity to play football and get a degree,” he said. “I’ve met a lot of good people and made a lot of friends and the city of Troy will always have a special place in my heart.”

Brown will take part in practices throughout the week leading up to the game, which will give NFL scouts a chance to see the players in action, before taking the field for the Senior Bowl on Saturday, Jan. 28.

Kick-off is scheduled for 3 p.m. CST on NFL Network.