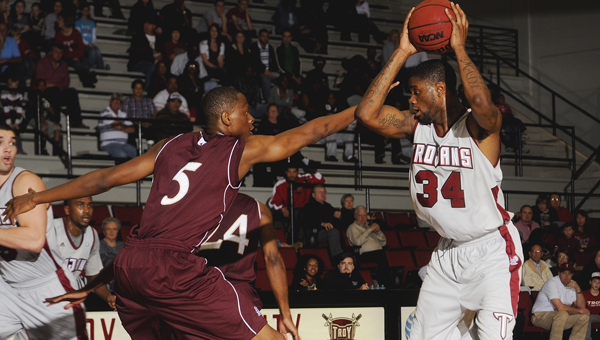 Emil Jones tossed up a contested shot at the first half buzzer. After a rattle around the rim, the bucket fell and that would begin a streak of 11 consecutive three-pointers as Troy defeated Louisiana-Monroe, 91-63.

The streak tied the NCAA record held by both Niagra (vs. Siena) and Eastern Kentucky (vs. UNC Ashville) both in 1987.

Guard Justin Wright said that while the team wasn’t aware of the stretch while it was happening, the run helped the team built confidence in their shooting.

“When one guy starts hitting, everyone starting hitting,” Wright said. “It seemed like everything we threw up there was going in.”

“Tonight’s victory was an important thing for our team,” Maestri said while giving credit to the 2,388 fans in attendance. “We were proud (of the attendance). When you play as poorly as we have then have the crowd we did is great.”

Wright led the Trojans with 18 points while Weathers picked up his first double-double of the season with 12 points and 12 rebounds.

The 28 point margin was the most in a Trojan victory in a Sun Belt Conference game since Troy joined the league in 2005.

Troy will travel to take on Middle Tennessee on Jan. 26. The Blue Raiders defeated Troy 63-53 in Sartain on Jan. 5.