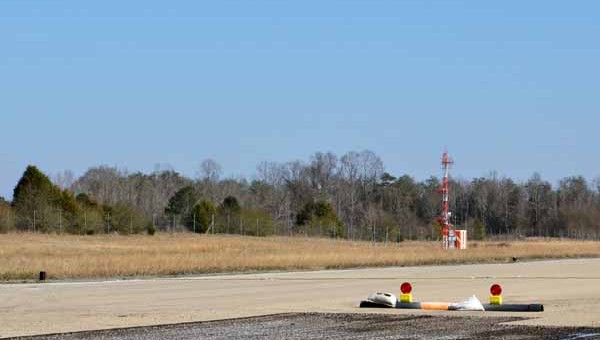 The opening of the runway expansion at the Troy Municipal Airport could be delayed up to six months, according to an engineer on the project.
Mayor Jimmy Lunsford met with representatives from Barge Waggoner Sumner & Cannon, Inc. this week and received some disappointing news.
Although the runway will be complete within the original 135-day contract, the Federal Aviation Administration requires the existing glide scope antenna to be moved, which will not be complete by early February.
“We tried to pursue this earlier, but the FAA put the brakes on us,” said Michael Cole, a civil engineer with the consulting firm hired by the City of Troy for the airport project.
The terms glide slope and reflection aren’t familiar to most people who aren’t airport engineers or pilots, but the concepts are very important to the success of a $2 million instrument landing system installed at the airport by the U.S. Army.
The ILS is a ground-based instrument approach system that provides precision guidance to aircraft using a combination of radio signals and high-intensity lighting to enable safe landings when weather conditions may not be favorable. Pilots could rely on the ILS in instances of low ceilings and reduced visibility due to fog and rain.
Cue the next unfamiliar term – glide scope antenna. A glide slope antenna is part of the ILS and is situated on one side of a runway where an aircraft would touch down. The glide slope should be 3 degrees above ground level. So, to properly move the glide slope to the area it should be located along the runway in relation to the expansion, dirt must be moved to change the topography of the area next to the expanded runway.
“This thing is ballooning into a much larger project than just building a pad for the glide scope antenna,” Cole said.
Since the city’s contract with Barge Waggoner Sumner & Cannon ends in February and a new consultant is slated to take over, Mayor Lunsford said he needs to discuss options with the FAA.
Cole said he wasn’t sure what the cost of the project would now be, but the FAA is committed to fund it.
“I have to speak with the FAA and make sure what is best for the city and project,” Lunsford said. “I don’t know if we’ll amend the current contract, or if we’ll start a new process after this current contract is up.”