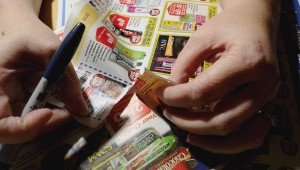 Long before there were reality television shows glorifying coupon use, Pike County had coupon queens clipping their way to savings for their families.

“Who doesn’t love to save money?” laughed Heather Bunn who began scanning papers for deals about 14 years ago when her son was just a baby.

“I was always looking for diaper coupons, but then I began to look at how many coupons and rebates were out there that we weren’t taking advantage of,” Bunn explained.

Bunn said that she begin to find patterns in coupon releases and local store sales and found the most savings on toiletries a drugstores.

“The first week of every month a Proctor & Gamble insert comes out in the paper, and usually all three of the drugstores in town will have a sale on Proctor & Gamble items. So, you can combine those savings,” Bunn said.

“I think those shows are absolutely ridiculous, and I don’t think that a regular person would get that kind of response if they walked up to a register with five carts full of products they were trying to get for free,” Bunn said. “I think those people on TV are getting a friendly response and cheers from the store staff because the store is being shown on television.”

And Bunn says the average couponer doesn’t have access to hundreds of coupons each week, and many stores don’t honor computer-printed coupons.

Dianna Lee is also a thrifty spender who uses coupons.

“Coupons make me feel better about the money I spend because I spend it wisely,” Lee said. “I look for deals on things I would normally buy.”

Lee said although she might try new items because she has a coupon for one, it is important not to waste money on things just because you have a coupon.

“If you aren’t going to use a product and you know it, even if it is $.50 with a coupon, you are wasting that money,” Lee said.

Lee suggests to coupon novices out there to become familiar with local store coupon policies. Find out what days stores may double coupons and know ahead of time if Internet coupons are accepted.

Lee said she recently had an initial grocery bill of $122, but it was knocked down to about $90 with the coupons she had. Lee said she takes cues from Bunn.

“She has actually broken even before,” Lee said. “She’s quite the guru.”

Lee agrees that television puts a glamorous slant on couponing and said that shoppers should be realistic.

“Time is valuable to me, as well, and I’m not going to break my purchases up into 15 different transactions,” Lee said. “In my opinion it gets to a point where I ask, ‘How much is my time worth?’ My time is worth is more.”

Lee said she is happy that her savings allow for her and her family, including teenage triplets, to eat out on occasion.

Piggly Wiggly owner Jennifer Garrett said she has definitely noticed an increase in coupon use since all the reality shows have hit television.

“People have a hard time understanding those shows are filled with misconceptions,” Garrett said. “You have to pay taxes on items, even if you have a coupon. And many coupons say there is no cash value, so they aren’t making money back when sometimes people on TV would.”

Garrett said that people also aren’t always happy to find out her store doesn’t accept Internet coupons. The local grocer said it is up to manufacturers whether they honor coupons or not and many online deals don’t have expiration dates, even if a manufacturer is no longer honoring the coupon.

“We don’t always get paid for the coupons people use,” Garrett said. “That’s why we have to make sure on our end that the coupons are an exact match for the product someone is checking out. We have to prove we sold an item in order to be reimbursed, and that doesn’t always happen.”

But Garrett said she understands the want and need to stretch a dollar and is happy to have any couponer shop at her store.

“I wouldn’t care if someone came in here with 200 coupons as long as they are nice and patient,” Garrett said. “Our cashiers have to make sure they are doing their job right and they have to read each coupon. So, just be patient with us.”

The Bryan Hiveley Ceramic Sculpture exhibition opened Tuesday at the Malone Gallery on the campus of Troy University. And, even... read more