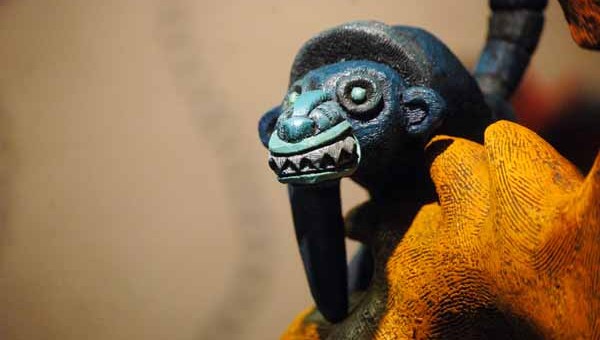 The Bryan Hiveley Ceramic Sculpture exhibition opened Tuesday at the Malone Gallery on the campus of Troy University. And, even those who don’t like art are going to like this exhibit, said Duane Paxson, gallery curator.

Paxson said the exhibit has a Mayan look and feel to it.

“Bryan Hiveley’s work appears to have been influenced by Mayan architecture and color,” Paxson said. “Hiveley’s color comes from oil paints, not from glazes. If the pyramids had color, it would have been the colors he uses. His sculptures are brightly colored and highly energized.

“With titles like ‘Goats on Parade’ and ‘Monkey on the Back,’ this is a very interesting and entertaining exhibit and one that everyone should enjoy.”

Hiveley teaches sculpture and ceramics at the Miami International University of Art and Design. His work is “kind of personal narratives.”

“Most all of my work is inspired by nature,” Hiveley said. “The natural world has always been the driving force in my creation of art. Nature is an endless source of inspiration and fascination.  My goal is not to directly mimic specific objects in nature but rather to suggest universal biomorphic forms with no discernable identity. I reexamine the world around me.”

As he reexamines, Hiveley creates forms that include all the main elements of art in such a way that “you just can’t help but like them.”

Most of the ceramic sculptures in the Malone Gallery exhibit were inspired by animals, mainly by Hiveley’s pets.

His work is now more narrative than abstract and most of those who view his sculptures actually “get it.”

“‘Goats on Parade’ was inspired by the goats at a local zoo where I take my drawing class,” Hiveley said. “Most zoo animals ignore you but the goats get very excited because we feed them. They come as close to us as possible. Almost like they are performing.”

Hiveley’s goats are perched on a ball much like animals that perform in a circus.

The sculpture “Social Behavior” was inspired by dogs that come face-to-face in the park.

“When dogs are introduced, they begin dancing, jigging, and you don’t know if they’re playing or if there’s going to be a dogfight,” Hiveley said, laughing.

Hiveley’s dog is a Dalmatian who is anything but ferocious but doesn’t know that he’s not a terror on four legs.

“I started wondering how my dog sees himself and I tried to get inside his mind,” Hiveley said. “I think he imagines himself as a superhero so that’s the image I sculpted.”

Hiveley trails his bird sculptures with ceramic dots that pinpoint their pattern of flight.

“When it snows, birds leave their footprints in the snow showing where they have been,” he said. “The dots show the history of travel of birds in flight.”

And, it’s that history of travel that gives Hiveley’s wall sculptures energy.

“You can actually feel the birds in motion,” Paxson said. “There is so much energy in his work and so many vivid colors and so many interesting forms, you just have to like it.”

The Bryan Hiveley Ceramic Sculpture exhibition will run through Feb. 16 and close with a public reception and artist’s lecture at 4 p.m.

The gallery is open to the public and admission is free.