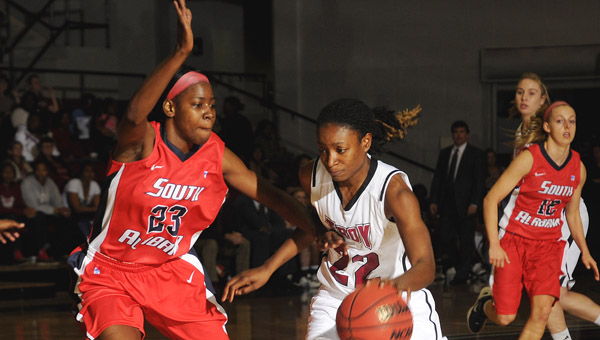 The Troy women’s basketball team dropped to 1-15 overall and 0-5 in conference play after a 53-46 loss to South Alabama on Saturday.

“DeAngela is going to require a lot of attention from the other team,” said Murphy. “She’s our leading scorer and one of the top scorers in the conference. I give her a lot of credit. Many people don’t realize that she has to overcome a lot just to play a game. It really shows her character and drive with the kind of commitment she has for this team.”

Troy fell behind by as many as 17 in the second half but fought back to cut the deficit to just five but ultimately fell to the Jaguars hot three-point shooting.

“I’m really pleased with my team’s effort; there was just a stretch in the second half where we couldn’t score,” said head coach Micheal Murphy.“It wasn’t a byproduct of bad shots, we just couldn’t finish. At one point we were down by 17 and in a span of five minutes cut it down to five.”

South Alabama hit five threes in the second half to pull away. The Jaguars would also shoot 13 of 16 from the free throw line.