Friday the 13th brings long-time superstitions to the fore 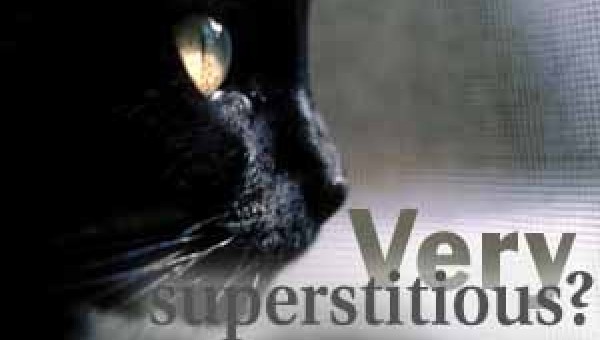 When the calendar reads Friday the 13th, some people decide to pull the cover over their heads and stay in bed. Others exercise extreme caution while still others laugh in the face of superstition.

Triskaidekaphobia is the fear of the number 13 and, when the fear is specific to Friday the 13th it’s called paraskevidekatriaphobia.
So, today many people will be experiencing paraskevidekatriaphobia but few call it that. Instead, they’ll say they are just plain superstitious and Friday the 13th is foreboding enough for them to take every precaution that could lead to bad luck in their lives.

Linda Walter of Troy has no irrational fears when it comes to Friday 13, black cats or walking under ladders.

After all, she lives with a best friend named Mr. Monster, a 14-year-old cat that is as black as the ace of spades, and he crosses her path many times a day. Any bad luck that Walter might have experienced, she chalks up to something other than a black cat crossing her path.
The more superstitious among us, however, will turn around and go in a different direction if a black cat crosses their path. If it’s not possible to turn back, a man can spit in his hat and turn it around and that will ward off the bad luck. “Cussing” the cat will also do the trick but most people don’t rely on that; they just turn around and go back.

“They would fly missions 12A and 12B and jump to mission 14 but they would not fly mission 13,” she said. “Many high-rise buildings and hotels don’t have floors numbered 13 because so many people associate the number 13 with bad luck.” Walter said an interesting superstition that is said to have originated during World War I is “three on a match.”

“The superstition was that, if three soldiers lit their cigarettes from the same match, the man who was third on the match would be shot,” she said.

The belief was that, when the first soldier lit his cigarette, the enemy would see the light.

“Since then, it has been thought to be bad luck for three people to share a light from the same match,” Walter said.

Not often do people share lights from matches these days, but it’s interesting how superstitions originate.

Walter said “knock on wood,” isn’t exactly a superstition but, in a way, it is.

If someone says “I haven’t had the flu in several years, ‘knock on wood’” and gives a couple of raps on wood, then that expression and that action will keep the flu at bay.

“‘In Medieval times, wood was thought to contain friendly spirits so, to awaken the spirits, you had to ‘knock on the wood,’” Walter said. “Today, we ‘knock on wood’ to bring good fortune our way.”

This Friday the 13th, people from all walks of life will turn around when a black cat crosses their paths. They will avoid stepping on cracks in the sidewalk and walking under ladders. Those who break mirrors will have seven years bad luck, as will those who open an umbrella inside a building.

No “knocks on wood” or rubs of a rabbit’s foot will undo the bad luck that will be conjured up on Friday the 13th so keep your fingers crossed and hope for the best.