‘Go with your gut’ 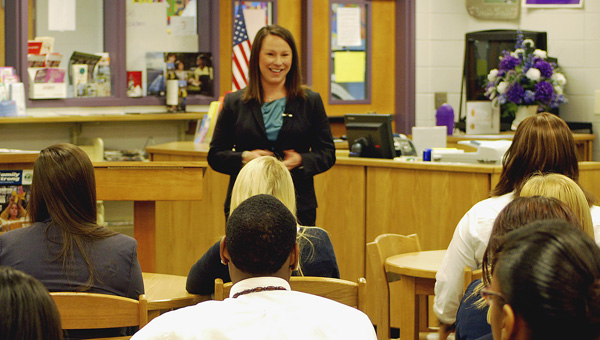 A muted “shhh” came from students donning ties and heels Tuesday morning in the library of Pike County High School. Then came cheers as Congresswoman Martha Roby walked into the room.

Roby visited with the Academy of Business and Finance students and seniors at Pike County High to talk about politics, compromise and success.

The congresswoman spoke candidly with students about how she came into her political position and some of her fears and hopes.

Roby, a Montgomery native who studied music business at New York University, said when she decided to go to law school, she was wait-listed at Brooklyn Law and ended up coming back to Alabama for school. But coming back home wasn’t a bad thing for the Southern girl turned city girl.

“The second I got off the plane in Alabama, I was glad I was here,” Roby said.

Roby later heard a speaker at her brother’s high school graduation talk about what a shame he felt it was that bright students became successful and left the state. It was then that she and her now-husband, Riley, pledged to stay in Alabama and “give back.”

“I never set out to be a politician,” Roby laughed, reminding her audience about her want to be a music executive.

“Don’t miss opportunities. Keep your eyes wide open. If you don’t keep your eyes open, you could miss an opportunity that’s going in another direction.”

One student asked Roby if she ever got nervous speaking to others.

“Sure I do! I’m human, right?” Roby answered with a smile.

She added an anecdote about how she was her family’s “wedding singer.” She said she didn’t perform much for people outside her family, but those performances gave her a little bit of courage later when she began speaking to audiences as she took on her “unexpected role” of a politician.

“What you are doing right now could be preparing you for something later,” Roby said, encouraging students to be bold and brave in their endeavors.

And the teens that listened to Roby’s address Tuesday took her words about patriotism and service to their country to heart.

“It was a wonderful opportunity to hear her thoughts and see how open she was,” said Shanterrica Shipman, an 18-year-old senior at Pike County High. “I know people who are big like that and into politics normally just want to talk to adults, so she gets a big thumbs up from me for taking the time out for us.”

Shipman said she could see herself stepping into a political role, much like Roby did. Shipman plans to attend Tuskegee University in the fall and study social work or business and finance.

“She told us to go with our gut,” Shipman said. “I think that is good advice.”

Roby’s visit with the Academy students is part of a series supported by First National Bank of Brundidge. Other speakers this year have been Cornelius Griffin, Young Boozer and Kay Ivey. Academy Director Sharon Denison said she’s been pleased with response from her students. She said, “It’s really an invaluable opportunity for the students.”