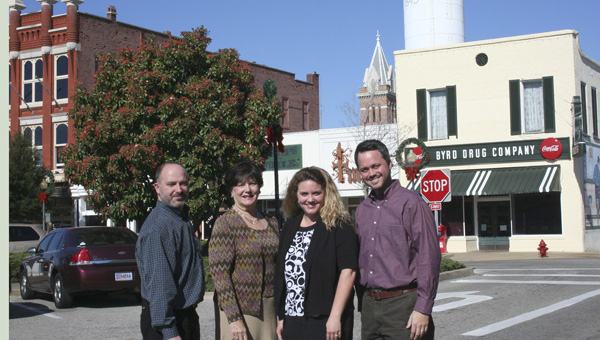 John Phil McLaney, Kathy Sauer, Lee Anne Wofford and Adam Drinkwater toured the downtown area on Thursday in an effort to identify potential areas to include in a historic preservation study funded by a state historical commission grant. (Photo/Jaine Treadwell)

Troy took another step this week toward historic preservation efforts in downtown.

The architectural survey coordinator for the Alabama Historical Commission was in Troy this week to help define areas of Troy to be included on a baseline survey. The survey is being funded by a 2012 Historical Preservation grant the Pike County Chamber of Commerce received from the state historical commission.

Lee Anne Wofford said the Alabama Historical Commission is pleased to have awarded the grant to the county chamber.

“This project will identify historic buildings in Troy’s downtown area,” Wofford said. “The information collected will be used as the basis of a downtown preservation and renewal strategy which will develop heritage, tourism and education programs for the public. The project will compliment the College Street National Register Historic District.”

Kathy Sauer, president of the Pike County Chamber of Commerce, said the Chamber is very appreciative of the $15,880 grant.

“We are grateful to the Alabama Historical Commission, Gov. Robert Bentley and the Alabama State Legislature for awarding us this baseline survey grant,” Sauer said.

The Chamber is seeking to reach into different areas of the town with the baseline survey.

Wofford was given a tour of areas and buildings and structures in the city that could be defined as historic.

Sauer said extended areas around College Street, the downtown area and sections of Brundidge and Three Notch streets are being considered for the survey.

Once the areas have been defined, the bids will be taken for the baseline study.

“Once the bid is awarded, each of the buildings or structures will be evaluated and those that qualify will be photographed and their historical significance for the district will be defined,” Sauer said.

For the buildings and structures to be listed individually on the Alabama Register of Landmarks and Heritage, application will have to be made by the owners to the Alabama Historical Commission.

John Phil McLaney, Jr., president of the Pike County Historical and Genealogical Society, said the Preservation Grant is a wonderful opportunity for Troy.

“Finally, the historic businesses and residences in Troy will be documented,” McLaney said. “The information collected through this survey will provide a base line for future historical restoration and preservation in the city.”