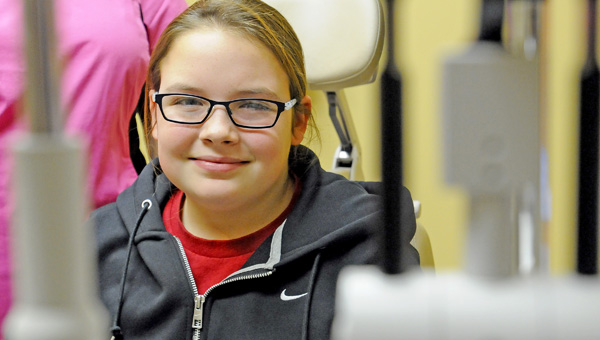 Eleven-year-old Bailey Rushing is back in school and can now see shapes, light and colors with her left eye. The occurrence is remarkable, considering she was shot in the eye by a toy crossbow two months ago.

“I didn’t know exactly what was wrong,” Bailey said. “I knew it hurt really bad and I couldn’t see.”

Bailey was on a field trip at Fort Toulouse when she and classmates purchased wooden toy crossbows from the gift shop. At the time, Bailey said she didn’t think the crossbows were dangerous.

“They looked cool and other people were getting them, so I went ahead and got one, too,” she said.

One of her classmates turned around and fired a shot that struck the sixth-grader in the eye. The arrow ruptured her eyeball.

If Bailey had any luck that day, it was that her mother works at Troy Eye Care with Dr. Shanna Kirk, and Dr. Kirk’s husband was chaperoning the field trip.

“I know there is a reason I work here,” Bailey’s mother Andrea Rushing said. “It is a blessing he was with her.”

Andrea said, under the advisement of Dr. Kirk, her daughter was rushed to a facility in Montgomery where she underwent surgery to close her eye. Since then, Bailey has had another surgery to remove her damaged lens and debris behind the eye.

“It’s going to be a lifelong challenge for her. We don’t know from day to day what will happen,” Andrea said.

But Bailey’s spirit and determination has kept her parents focused on her recovery.

“I have to be really careful if I am playing or outside or anything, but luckily I can play outside now. I’m more of an outdoor person,” Bailey said with a smile.

Bailey goes to the doctor every two weeks to have a couple of stitches removed from her eye. If they are removed too quickly, it could open again. If they are left in too long, scarring could occur. There were originally 20 stitches, but Bailey is now down to eight.

At night and during activity, the Pike Liberal Arts student wears a protective shield over her eye. Without the shield though, most people would never notice a problem. If you look very closely, a thin white line is visible across her eye.

“I can see a few letters on the big screen,” Bailey said, referring to an eye chart. “It’s really blurry and very light sensitive because my pupil is larger and it stays larger.”

But Bailey, who loves to play softball, said she isn’t too worried about her sight not being restored.

“I’ve already gotten some of my sight back better than it was because I could barely see movement the second day,” she said.

“She is determined she is going to get through this,” Andrea said.

Bailey wants to use her experience to caution other kids about being careful with toys, even when they don’t seem harmful.

“The shooting toys like Nerf guns, you may not think would be dangerous, but they can be very dangerous,” Bailey said.