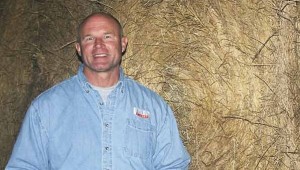 Randy Johnson stands by some of the hay he will transport back to Texas for the remainder of his cattle herd.

“What goes around comes around” and, in truth, things have gone around and come back around for Randy Johnston and his dad, Randolph Johnston.

When Alabama was plagued with drought conditions in the summer of 2000, Randy loaded his dad’s herd of beef cattle onto gooseneck trailers and hauled them to be pastured at his ranch near Dallas.

Randy has sold most of his herd of beef cattle to his dad and transported them to greener pastures in Brundidge. On each return trip to his Texas ranch, the younger Johnston has hauled hay back to feed the remaining 39 head of cattle that are the hope for his future cattle operation as Texas is in the grips of the worst drought in its history.

“I’ve never seen anything like this Texas drought,” Johnston said. “I couldn’t even begin to imagine anything like it.  Texas ranchers have slaughtered 600,000 mama cows because there’s nothing to feed them and no water for them to drink.”

Johnston said he had no choice but to reduce his heard to almost bare bones.

“I’ve got 27 stock tanks for water and 13 of them are dry and the others are way low,” he said. “You can’t hydrate cows like that. One cow can drink 50 gallons or more of water a day.”

Johnston said he has seen cows bog down in mud up to their utters trying to get to stagnant water in the deepest areas of a pond.

“That’s a sad sight and, when ranchers see that, they’ll just give up trying to hold on because there’s no way,” Johnston said. “You can buy hay but you can’t buy water.”

Some of the really big ranches have bought pastureland in Oklahoma and Missouri and hauled their cattle there.

“They can buy land for the cattle to graze and, then sell the land after they sell the cows,” Johnston said. “That has been a way for them to hold on. Ranchers are trying everything possible but there’s not much you can do when you don’t get rain.”

Johnston said he got a cutting of hay in June and then it was four and a half months before he saw another drop of rain.

“And, the first cutting was about 90 percent,” he said. “After four months, we got a half inch of rain and, then didn’t get any measurable rain until December. The cost of a bale of hay jumped to $100. Cows eat about 35 pounds a day and a bale is 1,000 pounds. So you do the math on that.”
Johnston said he was feeding his cattle cotton seed cakes and corn stalks as supplements.

“But, there was no affordable way to get through,” he said.

So he loaded his herd on 32-feet, gooseneck trailers and headed 685 mile, east to Brundidge.

“But breeding back with cows that have suffered through this drought won’t give you the high quality of cattle you want. It will take 10 years to build a herd back to where it needs to be.”
With the Texas drought taking its toll on beef cattle production, Johnston said the price of beef will, in all likelihood, rise.

“It’s a supply and demand thing,” he said. “But the supply is decreasing and the demand is increasing. In addition to the domestic market, there is a strong export market for beef so the demand will continue. Shoppers can expect to see higher beef prices in the markets and in restaurants.

“I eat beef but I don’t know if I’ll want to or be able to pay the high prices. I might have to eat my own cows.”