Donna Arnold isn’t the kind of person who always has a pet around the house.

But she does care for animals and can’t stand to see one abused or neglected.

For that reason, she didn’t hesitate Wednesday to take in five puppies that had been abandoned on a rural road near Kinston.

“I heard on the scanner that the Coffee County Sheriff’s deputies had found a mama dog and five puppies,” said Arnold, who lives in the Perdue community. “The mama dog was dead and her back legs had been tied together.  They were taking the puppies to the pound and said that the puppies would probably be euthanized, and that one of the puppies probably wasn’t going to make it anyway.”

Arnold said she couldn’t stand the thought of the puppies being put to sleep, so she called the Elba Police Department to find out where the puppies had been taken. 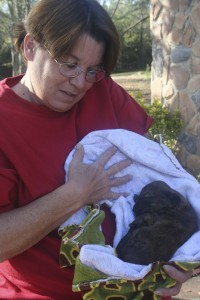 “I told them that I would take the puppies and give them a home until I could find somebody that would take them,” Arnold said. “The puppies were at the pound so I went and got them.

“Four of the puppies are doing really well. I’m feeding them something like Enfamil for puppies and the gravy off Gravy Train to get them ready for dog food. I think they will be all right. But the other one … I’m just not sure about.”

Arnold had planned to name “other” puppy, Hope, in hopes that ‘she’ would survive.

“But, when I gave the puppies a bath, I saw that they are all males,” she said. “So, I named him Will because we are willing him to live.”

Whether Will is the runt of the litter or just sickly, Arnold said she’s doesn’t know.

“But I’m feeding him with a syringe and he’s eating a little,” she said. “I’m keeping him warm and, maybe, he’ll make it.”

The other puppies were named by Arnold’s 5-year-old grandson, Colin Arnold.

“I named them Niko, after an Alabama football player, and Roscoe and Buck and Champ,” he said.  “We think they may be Golden Retrievers. I want to keep them all.”

And, Arnold said she will keep them all if she can’t find others who will give them good homes.

“And, I think, I’ll keep Will anyway,” she said. “I can’t imagine why anybody would abandon these little puppies and tie their mama’s legs together like that. It’s a mystery why they did that. We’ll probably never know.”

What Arnold does know is that her heart is big enough to take in five puppies that were left “on the mercy of the world.” 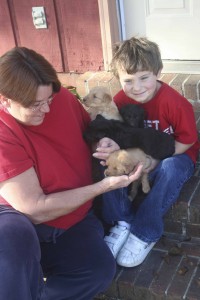 It had to have been her heart that made her do it.

“I’ll take care of the puppies if no one else wants them,” she said. “But, they are used to children and I know they would make good family pets. But, Will. If he can just make it, he’s mine.”

Anyone who is interested in giving these abandoned puppies a loving home is asked to call Arnold at 372-1531.