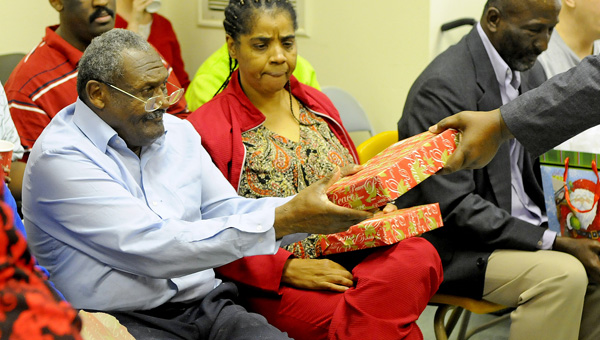 Members of the First National Bank of Brundidge continued their 10-year tradition on Thursday and delivered presents to East Central Mental Health clients at the Pike Activity Center in Brundidge.

What started as an “I’ve got an idea,” from Bank President Jimmy Ramage has turned into an event clients begin asking about five months in advance.

“We wanted to reach out to the community,” Ramage explained. “And then it hit us.”

Ramage said he and the other bank employees would pass by the center in the mornings and clients would smile and wave. Ten years ago, instead of exchanging Christmas presents with co-workers, the employees at First National Bank of Brundidge decided to “adopt” the clients of East Central.

“We’ve come so many times now we’ve gotten to know each other,” said Ramage as he broke away to shake hands with and talk to a client from Midland City.

“Some of them, this is the only Christmas they have,” said Dan Zapata, a director at East Central. “That’s what makes it so special.”

Clients of East Medical range from profound to mild mental retardation, Zapata said. While some are living on their own, others are home bound.

Client Victoria Harrison said she’s been going to the Christmas gatherings with First National Bank employees for “a long time.”

For her present, Harrison received a nail care set she said she liked “very much.”

Harrison has coordinated skits and dances of appreciation to share with bank employees for the last few years. This year, clients had been practicing their performance “since Thanksgiving.”

Harrison choreographed a dance showing “praise for the birth of Jesus.” After she and other clients performed the piece for their guests,

Harrison taught the number to bank employees and they joined in for another round of praise.

“This is such a nice way to start the Christmas weekend,” Ramage said.