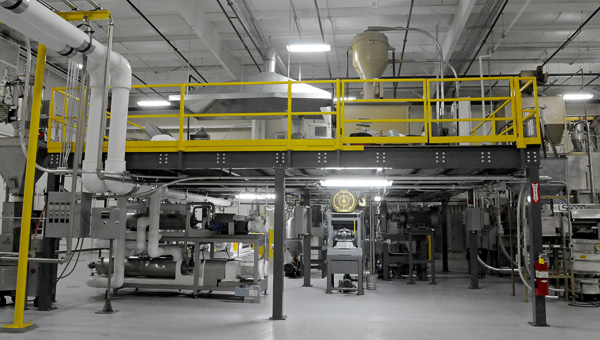 There could be up to 60 million pounds, or 54 million 18 ounce jars of peanut butter flowing from Troy by 2013.

That’s the amount Golden Boy officials estimate their new factory will be able to produce when both lines are fully functional, if the operation runs 24 hours a day, seven days a week.

“We are aiming to make some peanut butter in early January,” said company President and CEO Richard Harris. “We are in the process of getting ready to start up the factory.”

Watch video from inside the factory here.

The company already has purchased a second production line and Harris said he hopes it is in place by late 2012, or early 2013.

And peanut butter isn’t the only thing Americans will be finding on supermarket shelves with a “manufactured in Troy” label. By the middle of 2012, the facility should also be churning out almond butter. That production line is set for installation in January or February.

Golden Boy has hired 21 people already for the new factory and will be filling two more positions very soon. If you applied for a job with the company already, don’t give up hope, said Production Supervisor Shirley Clark.

“We still have the applications and will be pulling from those,” Clark said. “As the operation grows, we’ll be hiring more and more.”

So far, a soldier who recently returned from Afghanistan, area residents who were let go due to lay-offs and business closures, and veterans are all among the people currently working for Golden Boy’s facility in Troy.

Harris said, ultimately, 65 people will be needed for one production line operating 24 hours a day. The facility will begin working at a pace of eight hours a day, five days a week and add shifts as production needs increase.

Troy was an good choice for Golden Boy, Harris explained, because much of the demand for peanut butter comes from the South.

“We felt we could do best to add a plant closer to where they wanted the product, and where peanuts are grown,” Harris said.

And while Golden Boy has received a warm welcome and support from the mayor and the Pike County Economic Development team, they are also giving back to the community in many ways.

Instead of sending out Christmas cards to their connections, Golden Boy sent e-mails. If recipients responded, the company pledged to donate one case of peanut butter to a food bank in the Troy area.

“We’ve got at least 30 cases going to places who need it,” Clark said. “Alabama is home to me and Golden Boy has given me an opportunity to give back.”