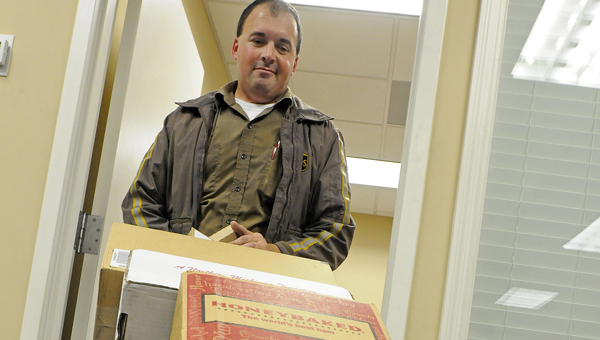 Mark Johnson delivers packages in Troy, Ala., Wednesday, Dec. 21, 2011. Johnson, who braved the rain to deliver packages, says the peak season for deliveries won't stop until mid-January, when all the holiday returns have been completed. (Messenger Staff Photo/Thomas Graning)

‘Tis the season for last-minute shipping. When family members are far away for the holidays, sending presents by planes, trains and automobiles makes people feel a little closer.

The UPS Store in Troy has seen a steady stream of customers come in since Thanksgiving, but Mondays have been the busiest, according to storeowner Deanne Baggett.

Even though Christmas day is fast approaching, Baggett said people should be able to get gifts to friends and family on time if they come in today or Friday.

“There is still next day and second day air shipping,” Baggett said. “But ground shipping is only estimated, now.”

The U.S. Postal Service has also been busy with customers shipping holiday gifts.

Debbie Fetterly, communications program specialist for the Alabama and South Florida districts of the USPS, said Wednesday was projected to be their busiest shipping day of the year and Tuesday was estimated to be their biggest delivery day.

“Thursday shipping, we recommend Express Mail, and we do deliver Express Mail on Christmas day,” Fetterly said. “Sometimes delivery people even dress up as Santa and that can be a nice touch.”

If you still have Christmas cards to mail, the earlier in the day, the better, Fetterly suggested.

UPS employee Mark Johnson, of Prattville, was delivering packages in the rain along Brundidge Street Thursday and said he has a brown and gold Santa hat he usually wears at this time of year.

Johnson was cheery despite the weather.

“The weather makes it a little more difficult,” he said. “But we are going to get it there.”

Johnson said he thought peak season for shipping was over, but when he got to work on Monday, there was about a 25 percent volume increase. And the hard work won’t end for shipping companies or post offices until the middle of January, Johnson estimated.

“That’s when all the items shipped late and returns will die down,” Johnson said.