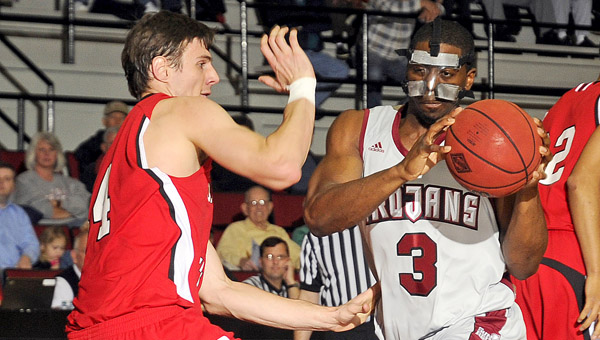 Steven Cunningham didn’t let his eagerness  show as Troy’s starting lineup was called just before the Trojans took the court against Southern Utah. His named wasn’t called but once one the floor, he let his play show how he felt.

Cunningham, back after missing six games due to a fractured orbital bone, scored 10 points in the Trojans 80-72 victory Tuesday night.

“After being out for a month, I was anxious,” Cunningham said. “I tried to stay calm before the game started. It felt good to be back.”

Cunningham, who was averaging 23 minutes per game before the injury, was expected to miss six weeks but after evaluation was cleared to play after 31 days.

“I thought I was going to be out pretty much the whole season,” he said. “I prayed about and let His will be done. I’m happy I can come back and play.”

The Trojans (5-5) improved to 4-0 at home this season with their only road victory coming against Southern Utah on Nov. 26.

In the first meeting, point guard Will Weathers saved the day scoring the team’s final 11 points to help pull out a 80-76 verdict. This time around it was Cunningham and Ray Chambers who provided the spark. Chambers scored 12, which tied his career best that he set earlier this season against LaGrange, and created a much needed offensive presence inside for the Trojans.

“We got back into a positive feel with that win tonight,” head coach Don Maestri said.

“Each one of these guys brings something to the table so to have Steven back and Ray playing well really gave us a boost.”

Cunningham’s electricity was felt with 17:32 in the second half and Troy leading by four, 38-34. Daronte Clark fed a wide-open Cunningham on a back door cut and the senior finished off the play with a highlight reel tomahawk dunk.

Senior Tim Owens, not to be outdone, helped swing the momentum of a back-and-forth affair midway through the second half. After a miss by Cunningham, Owens forced one through with a two-handed slam. Owens also set a career best with four blocked shots in the contest.

Troy would shoot 45 percent on the night but just 29 percent from three-point range. Maestri won’t let numbers characterize this victory.

“We’re real happy to win this game,” he said. “We thought it would be hard fought and we expected for them to come out and give us a heck of a game.”

Troy will take a day off before returning to the home court for the team’s final non-conference game against University of Texas at San Antonio. Game time is set for 7 p.m.