University Police have released the name of the person responsible for taking $23,000 worth of equipment from the 5th floor of the university’s Stadium Tower in September.

Jerod Turner, 22, of Taylor, confessed to the crime on Wednesday when he was apprehended in Dothan by University Police, with the help of the U.S. Marshal’s Task Force. 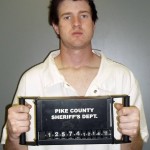 According to Troy University Police Chief John McCall, Turner was living as a transient at the time of the theft, but had moved back home with his parents and had gotten a job.

“He didn’t like what he was doing. He called his parents and asked if he could come home,” McCall explained. “I think he was trying to clean his act up, but he wasn’t going to turn himself in. When we came knocking on the door, he was ready to tell us everything.”

McCall had initially withheld Turner’s name pending an investigation by Troy Police. However, local authorities did not tie Turner to any other crime in Troy.

McCall credited a secret witness for helping break the case. A anonymous tip came in with information specific to Turner’s name and location.

“It’s always good when the public comes forward. That’s what we really needed to break that case. Luckily, we had a conscientious citizen who was able to do that for us.”

Turner has been released on bond, according to McCall. Police arrested him based on warrants out of Tuscaloosa, but McCall said Tuscaloosa authorities did not request that Turner be held for them. However, Turner could be arrested on theft charges if he returns to Tuscaloosa.

Police have not yet recovered any of the video gear, laptops or Web streaming equipment Turner took, but they know he pawned some of the items in Tuscaloosa. McCall doesn’t expect to have much of the property returned.

“This one was huge for us. By far, it was the largest theft, the biggest crime that’s happened on campus since I’ve been here,” McCall said. “Maybe not the most serious, but the biggest dollar wise.”