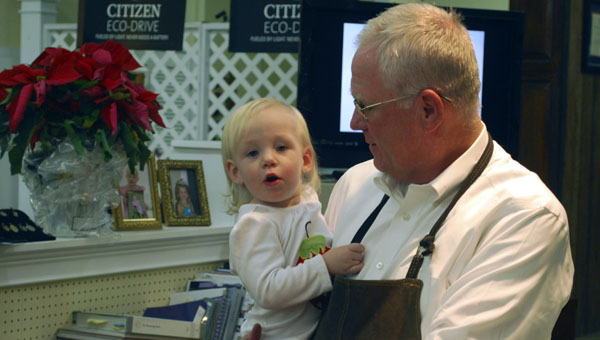 Scherr Qualls holds his granddaughter Kate Dykes who came to visit him at work. (Photo/Robbyn Brooks)

Qualls returns from deployment to spend holidays with family

Scherr Qualls gave his family and friends the best present imaginable this year. He made it home for Christmas.

Qualls traded in his dusty BDUs for a crisp white button-up and slacks Friday while he switched his duties in Afghanistan for those at Douglas Bros. Jewelry in Troy.

After four months on a Marine base overseas with the 375th, Qualls was able to sneak home at Christmas to surprise his family.

“I knew he was coming home, but we were keeping it quiet,” said Gwen Qualls, the command sergeant major’s wife.

The couple, who has been married for 37 years, ended up telling their daughters because they had to go to the airport to pick up Qualls.

“You get more used to it,” said Laura Qualls, Sherr’s daughter, adding that her father has been deployed with the Army Reserves three times now. “But it was still so good to see him and have him home with us.”

Qualls’ first stop after the airport was Douglas Bros.

“We just looked up and there he was,” said Sue Hoover, Qualls’ sister-in-law who also works at the jewelry store. “It was such a nice surprise.”

Qualls joined the reserves straight out of high school and has been enlisted for almost 38 years.

After he finishes his deployment and returns to Troy in August, Gwen Qualls said her husband plans to start his paperwork for retirement.

Although he’s only home for two weeks, Qualls said he plans to make the most of it. He’s been sampling food from all the local restaurants and eating items that aren’t quite prepared the same way in Afghanistan.

“Christmas dinner. That will be a big one,” Qualls said with a smile.

Both of his daughters and their families will be spending Christmas day at their parents’ home and their children will open presents there.

“I always like to be around family at Christmas,” Qualls said. “I spent Christmas in Kuwait in 2005. That was not as nice.”

A good time was had by all at the Christmas celebration at the Lillian D. Green Nutrition Center in Troy... read more