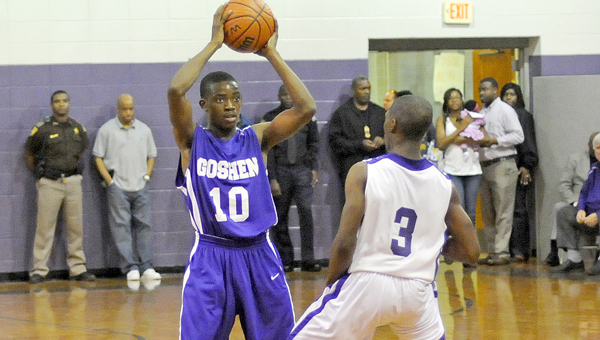 BRUNDIDGE – The Goshen Eagles traveled to Brundidge to take on Pike County High School. It took just over a quarter for GHS to take flight and soar – both literally and figuratively. A 21-point outburst in the second quarter put them in command and from there it was cruise control to a 64 – 36 win over the Bulldogs.

The game began as a closely contested match up as the previous encounter with PCHS had been. A basket by Marlon Meadows had the home team up 8 – 4 before the Eagles began to take control.Deangelo Orum and Joshua Milsap of Goshen led the way with baskets as GHS took a 13 – 11 lead at the end of first quarter.

The second quarter was the difference in the game. Milsap began the period with a dunk over a Bulldog defender and a second one from a fast break opportunity. By the time he jammed in a third one the Eagles lead was 21 – 13 and Goshen team defense took over from there. Brandon Alford returned to the game to add four of his nine points to help GHS race out to a 34 – 16 halftime margin.

Head coach Pate Harrison said “ Transition offense and rebounds were the keys tonight. We got turnovers which we were able to convert. We had Brandon get into early foul trouble and Reginald Foster and Jerome Lawrence came up big for us. “

The teams traded baskets for the entire third quarter with Pike County pulling within 45 – 30 by the end of the frame on a three pointer by Ryshawn Hall. Goshen countered strongly with baskets by Foster , Milsap and Orum on every occasion to keep the Eagles firmly in control.

Back – to – back baskets by Azriel Larkin of the Bulldogs kept the margin at 49 – 34 but the Eagles pulled away in the fourth quarter. Orum had nine of his sixteen points to seal the win as he led Goshen on a 15 – 2 run to close things out.

Milsap had an enormous night. He finished with 25 points , 26 rebounds and 5 blocked shots and was simply dominant. Milsap and tenacious defense were the answers to every attempt by the Bulldogs to remain competitive in this game.

Meadows and Larkin led PCHS with ten points each while Hall finished with seven.

The girls game was closely contested from start to finish. Ivia Pollard of Goshen was the offense for her team as she finished with 28 points in a 33 – 27 win over the Bulldogs. Pike County was led by Tierra Hall who finished with 17 points of her own. She gave PCHS their final lead at 27 -26 in the fourth quarter with a three – pointer but Pollard led a 7 – 0 run in the final three minutes of the game to take the win.