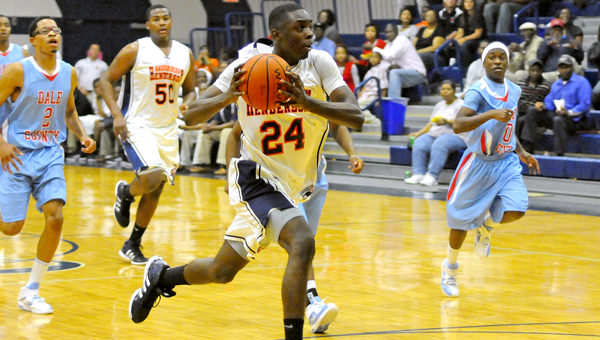 Before Trojan fans could settle into their seats, Charles Henderson held a 10-0 lead.

Before Dale County could register what was happening, the Trojans led 17-3.

Dale County, once on the board, never came any closer than seven points of the Trojans.

Davantez Jackson added a lay-in to give the Trojans an early 10-0 advantage before Dale County called a timeout.

The Warriors scored quickly to draw to within eight but another Charles Henderson run, this one a 7-0 stretch, led by Noel and Jackson extended the home team’s lead to 17-3.

Both teams slowed the pace in the second quarter but the Trojan defense never wavered. Dale County was held scoreless in the second frame until a CHHS turnover gave the Warriors an easy basket with just five seconds remaining.

Charles Henderson would outscore Dale County 11-2 in the period and the Trojans would take a 30-9 lead into the break.

The Warriors would open the second half with their most productive spell on the evening. An 8-2 run would close the gap to 35-17.

Devonta Jordan, who scored just a single point in the first half, claimed seven points in the third quarter alone. That coupled with Tedarius Sistrunk’s seven helped cool the Warriors.

Noel would finish the game as he started. The sophomore found his hot spot on the right wing in the fourth quarter. Noel would score six of the Trojans 12 points in the final period and register a team-high 14 for the contest.

Sistruck added nine for the Trojans as Gosha, Jordan and Tyler Mitchell scored eight each.

The girls team fared just as well pulling out a 78-30 victory over Dale County.

Charles Henderson will travel to Clayton to take on Barbour County tonight. Junior varsity will kick things off at 5 p.m.

Pike Liberal Arts School hosted Northside Methodist Academy for the first time ever in basketball action and were not very... read more