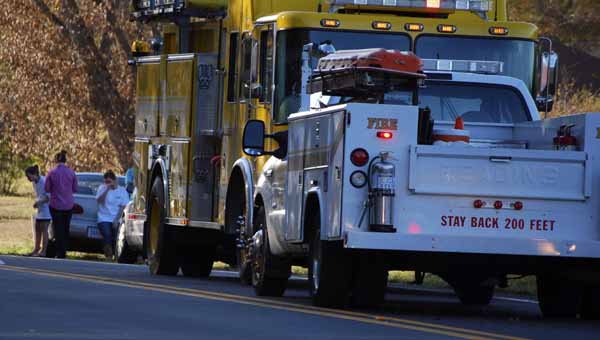 An ALDOT flagman was struck while working on U.S. 29 about seven miles west of Troy on Wednesday afternoon. The victim was transported by helicopter from the scene to a Montgomery hospital. Troopers continue to investigate the incidident. (Photo/Robbyn Brooks)

An Alabama Department of Transportation flagman was transported by Life Flight after being struck by a vehicle Wednesday afternoon.

Hobi Hussey, 21, of Elba, was taken to Baptist South in Montgomery and the severity of his injuries is unclear, according to Alabama State Trooper Greg Eubanks.

A Goshen emergency responder at the scene said the impact caused one boot and Hussey’s cell phone and radio to dislodge.

Troopers are investigating the wreck.

To see photos and videos from the crash site, visit www.troymessenger.com.

Christmas decorations are seen on a house on Wes College Street in Troy, Ala., Tuesday, Dec. 13, 2011. (Messenger Staff... read more