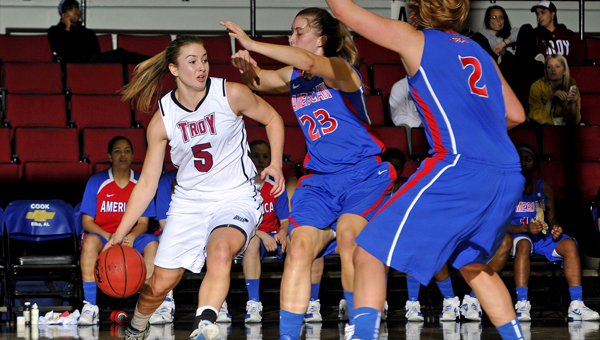 Troy's Sarah McAppion (5) drives the ball during the first half of an NCAA basketball game in Troy, Ala., Sunday, Dec. 11, 2011. (Messenger Staff Photo/Thomas Graning)

With tears welling up in her eyes and looking out at the Trojan logo on the court floor at Sartain Hall, Sarah McAppion revisited the moment when she thought her basketball career was over.

Since that time, McAppion has been determined to set an example.

“I realized how much of a love I have for basketball and how much I want to keep playing,” she said. “I go hard everyday because it was almost taken away.”

The Canberra, Australia, native is a redshirt junior on the Troy women’s basketball team. During her sophomore season in 2010, McAppion injured her left ankle and required surgery. McAppion went under the knife to repair stress fractures in April and was placed in a cast. When the cast was removed, she was allowed resume non-contact activities in August along with physical therapy.

“August came around and I could barely run,” she said. “I couldn’t walk, I couldn’t glide, I couldn’t do anything. It was frustrating.”

Her frustration would only grow. After months of rehab, McAppion returned home after her semester finals and her ankle worsened.

“I felt like I was doing better,” she said. “Then I started going backwards.”

After a visit to a surgeon to undergo an arthroscope in Australia, McAppion began the rehabilitation process again.

“I was horrible to live with,” McAppion said with a smile. “I was not in a happy place at all.”

Eventually, McAppion’s ankle began to respond and little by little her mobility returned.

While still not at a 100 percent, McAppion has been back on the court with a resurgent determination.

“I don’t think people fully appreciate how much Sarah has been through,” head coach Michael Murphy said. “She’s come a long way and it really affected her.”

McAppion was a star amateur, earning a scholarship to the prestigious Australian Institute of Sport. She competed as a member of the U-19 World Championship team at the 2009 Junior World Championships as well as the 2006 Oceania Youth Tournament in New Zealand where her team won gold. Murphy, who played professionally in Australia, began recruiting the country several years before and stumbled upon McAppion.

“I was back and forth on playing in college,” McAppion said. “Coach Murphy started emailing my dad and eventually sent me some stuff on Troy.”

The 5-9 guard still wasn’t sure of her collegiate future. She began consulting with fellow Aussies who had played at Troy, specifically, Alyce Shearing, who was a Trojan from 2006-10.

“There were four Aussies at the time and I started talking to them,” she said. “They said they loved it at Troy.”

There was also the option of becoming a professional. Australia is home to Women’s National Basketball League that sponsors 10 teams.

It appears the decision has worked out. McAppion, through the injury, has solidified herself as a leader for the Trojans. Thus far in 2011, McAppion is averaging 6.6 points per game and is leading all starters in free throw percentage.

McAppion still has one year of eligibility following this season and plans to make the most of it.

“I’m going to miss Troy so much when it’s over. My teammates are like my family here. I’m so glad I came.”