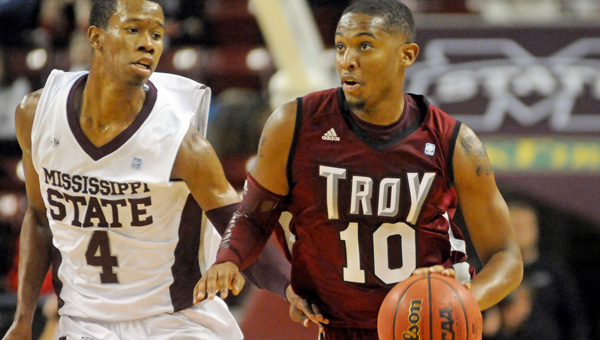 STARKVILLE, MISS.– Mississippi State lived up to its No. 17 ranking against Troy. The Bulldogs buried 16 three-pointers to tie a school record and rout the Trojans 106-68 at Humphrey Coliseum Saturday.

The Trojans (4-4) kept things close early but turnovers and a hot shooting Bulldog club proved too much as Troy shot just 32 percent from the field.

“I think we came out a little intimidated,” Troy guard Will Weathers said. “But when a team is shooting like they were it would be tough for anyone in the country to beat them.”

Mississippi State made shots at a blistering pace, making 56 percent from the field on the night.

“They are very athletic and very long,” head coach Don Maestri. “We caught them on a game where they were right. This was probably their best shooting night of the year.”

Troy pulled to within three, 16-13, on a Justin Wright three-pointer with 12:28 remaining in the first half. From there, the Bulldogs would outscore Troy 38-13 to end the half. MSU went on 19-2 run over a five-minute span.

“I think our guys were a little nervous,” Maestri said. “I think they made it a bigger game than they should have.”

Troy is now 0-9 all-time against Mississippi State and has never defeated a ranked opponent.

Trailing by 28 coming out of the half, the Trojans made a small run outscoring the Bulldogs 17-11 out of the break.

“I thought that the best thing we did,” Maestri said. “We came out and played better and made some shots”

The loss snaps a three game win streak for the Trojans. It was also the first time since 2008 that an opponent has surpassed the 100-point mark against Troy.

While the game, which was broadcast on regional television, was a disappointment for the Trojans, Weathers, who finished with 11 points, feels this team has the character to bounce back.

“We were just off tonight,” Weathers said. “ We will learn from this game and continue to improve.”

Troy will face Belmont on the road on Dec. 15 and Maestri feels that game could be a measure of how this team responds to adversity.

“We’ve got to play another tough team on the road,” he said. “You can’t let one game break you up. We’ve got to get it out of our minds and realize it’s just another game.”

Troy will travel to Nashville to take on Belmont at 7 p.m. on Thursday.

Troy's Will Weathers (1) drives the ball past West Alabama's Allen McGaha (10) during the second half of a basketball... read more