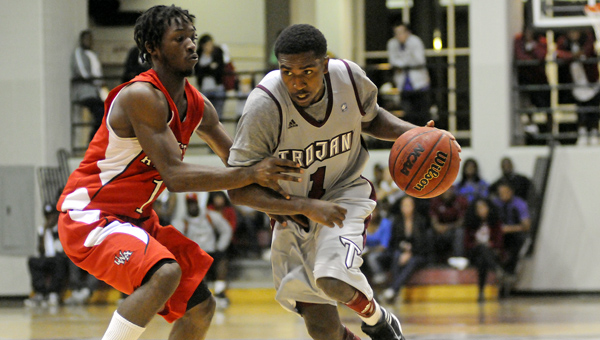 Troy's Will Weathers (1) drives the ball past West Alabama's Allen McGaha (10) during the second half of a basketball game in Troy, Ala., Monday, Nov. 7, 2011. Troy won 84-67. (Messenger Staff Photo/Thomas Graning

The Troy Trojans men’s basketball team will face No. 17 Mississippi State in a televised non-conference game today in Starkville, Miss.

The Trojans come in have won three straight but that streak will be put to the test against one of the most dangerous teams in the country.

“They are one of the top teams for a reason,” said head coach Don Maestri. “When you look at who they have beaten, you realize why they are ranked 17th.”

Mississippi State (8-1) won the 2K Sports Classic in New York in mid-November defeating both Texas A&M and Arizona who were both ranked in the top 20.

Led by senior guard Dee Bost, who is averaging 17 points per game, the Bulldogs have placed themselves as a true national title contender.

Aside from leading Mississippi in scoring average, Bost is 28 assists shy of breaking the school’s all-time record of 514.

The Trojans (4-3) have had little luck against the Bulldogs in previous meetings. Troy will head into the matchup 0-8 against the MSU but did force last years game into overtime before falling, 92-83.

Junior forward Arnett Moultrie will also present a challenge Troy. Moultrie averages just over 16 points per game but the 6-11, 249 pounder is also a hand full on the boards. With 11.9 rebounds per game Troy will need a special effort to stop the Bulldogs from converting second chance opportunities.

The Trojans have experience against a talented low-post player like Moultrie. When Troy faced Miami (OH), the Trojans held forward Julian Mavunga, who was also averaging a double-double to just eight rebounds.

The task of winning the rebounding battle will once again fall on senior Tim Owens. Owens hauled in a career-high 13 rebounds in the game against the RedHawks.

“Mississippi State has very talented athletes both inside and outside,” Maestri said. “We’ll have to play one of our best games.”

Most of the Bulldogs success has come on their home come this season. Of Mississippi State’s nine games, seven have been played in Humphrey Coliseum and two on a neutral court.

Despite playing on the road and against a ranked opponent, Maestri feels if his team can play well early the Trojans could give MSU a show.

“We’ll have to get them out of their comfort zone at home,” he said. “If we can put some pressure on them and keep it close, we’ve got a shot late.”

Troy will be the fourth of five Sun Belt teams Mississippi is set to face this season. The Bulldogs have defeated South Alabama, Louisiana-Monroe, and North Texas thus far and are scheduled to play Florida Atlantic on Dec. 13.

The Trojans are 3-40 all-time against the SEC.

The game will be televised on SportSouth with a set tip of 3 p.m.

Troy University’s search for its next sports information director has been narrowed to three candidates and while athletic director Steve... read more