‘We’ve got to build’ 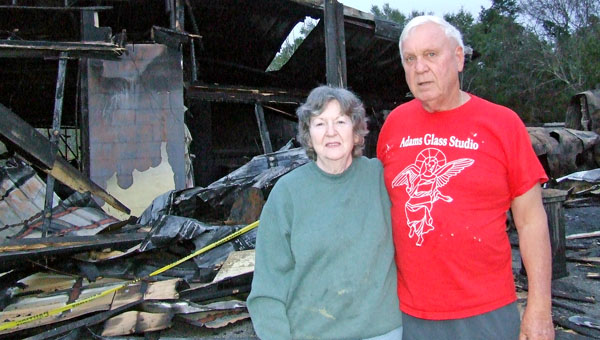 Charles and Mary Adams stood in front of the charred remains of the Adams Glass Art Studio earlier this week and talked of plans to rebuild the iconic store and studio. The couple said they have been overwhelmed with community support and concern since the fire last week. (Photo/Jaine Treadwell)

When Adams Glass Art Studio was going up in flames Wednesday, Charles Adams never thought he would build again. He just didn’t think he would or could.

But his family thought differently. And then, too, there was the sign from Sam.

“The only thing original to the store that wasn’t destroyed in the fire was the antique peanut roaster,” Adams said and added with a smile, “I think Sam had something to do with that.”

Adams’ dad, the late Sam Adams, started the roadside business in 1953. The roadside stand became Adams Nut Shop, which was known far and wide for its boiled peanuts.

Adams said that his son, David, was the first to say, “We’ve got to build back.”

“When David said that, I knew we would build back,” Adams said. “The ‘store’ has always been such a part of our lives. We wouldn’t know what to do without it.”

Adams admitted, too, that glasswork is his passion and he needs a place to work.

“I’d go crazy without something to do,” he said.

The weekend and Monday were spent salvaging “the least little thing,” from the fire, including a large scrap of Mary Helms Adams’ college diploma, a scorched photo of Elvis that a granddaughter wanted, a charred birdhouse and a Carol McCrady angel on blackened papyrus paper.

Today, the demolition of the ruins of Adams Glass Art Studio will begin.

“As soon as that’s done, we’re going to bring in two portable buildings, one for a workshop and the other for an office,” Adams said. “I’ve got a lot of orders that really need to be filled. I don’t know if I’ll get them done before Christmas, but I’ll do the best I can.

“I’ve got friends who are glass artists and they have told me that I can get anything I need from them so I can start working again.”

In time, construction will begin on the new studio that will be the size of the store that was built in 1976.

In the basement, there will be a workroom with a kiln, a woodworking room and an office. On the main level will be a showroom, a candy kitchen and a small workshop.

Adams said he has some plans for the new Adams Glass Art Studio that he hasn’t shared yet. He’s just formulating them in his mind.

“I really want to build back,” Adams said. “It’s hard to see something that has been such a big part of your life for 60 years burn to the ground. But, thankfully, no one was hurt. It’s time to move on now.”

Adams said that’s easier to do because he, his wife and family know the caring of so many people.

“We’ve had friends call from all across the country and people here have been so generous in offering their help,” Adams said. “Mary and I want to thank all of the firefighters and law enforcement officers that worked the fire. I don’t know how to begin to thank everyone for their support and their prayers and for every kindness shown to us. But we are very thankful. We hope everyone knows.”