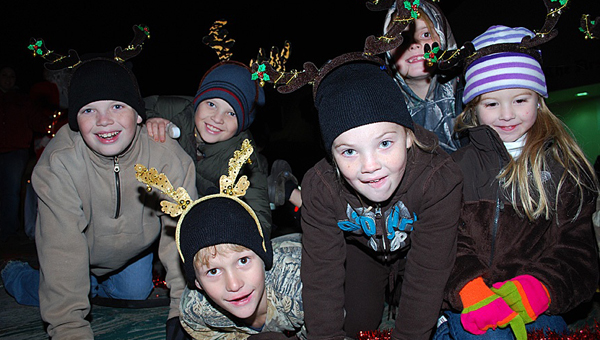 Brundidge continues to live up to its billing as quintessential Small Town, America.

The town’s annual Christmas Parade Tuesday night could easily have been a scene on a Norman Rockwell canvas, said Dixie Shehane, president of the sponsoring Brundidge Business Association.

“This is what small town America is all about,” Shehane said. “Families, friends and neighbors coming together as one to celebrate the coming of the Christmas season. This is the biggest Christmas Parade that we’ve had in a long time and the most well attended. The weather was perfect – a little cold but that made it seem like Christmas. It just couldn’t have been any better than this.”

The Troy University Pep Band got the festivities off to a musical start with songs of the season and the Christmas parade had a little of everything — bands, floats, public officials, fire trucks, horses, wagons, queens shepherds and Wise Men and even an 18-wheeler with twinkling lights to welcome the season. And, of course, the real Santa Claus.

A few of the kids who were a little doubtful gave the jolly ol’ elf’s beard a gentle tug. Now, they are hoping not to find switches in their stockings.

Following the parade, everyone gathered at the historic Bass House where Mayor Jimmy Ramage reminded the crowd that the city’s old-fashioned string Christmas lights have been making the town merry and bright for nearly 60 years.

“I can remember when I was a little boy how excited I would be when the Christmas lights were turned on for the first time,” he said. “I feel the same excitement tonight. I know many of you do, too.”

Ramage flipped the switch that lighted the town’s towering community Christmas tree and everyone joined in the singing of the carols of Christmas.

Children crowed around Susie Hastey on the porch of the Bass House as she read “The Night Before Christmas.” Then they were off to whisper their Christmas wishes to Santa Claus before going home having experienced the welcoming of the Christmas season the old-fashioned way.

“This was a great night in Brundidge,” said Lamar Steed, parade chair. “I want to thank everyone who made this night special- the Troy University Pep Band, the bands from Zion Chapel and Pike County high schools, all of those who participated in the parade and those who cheered it on and those who worked behind the scenes. The city is a great supporter of all that we do here and we appreciate everything the city does to make our events successful.”

The Rev. Samuel Valentine challenged everyone whose spirits were lifted by being a part of the community wide celebration, to “let the lights that shine in each of us tonight, go with us.”