‘Not a thing’ is left 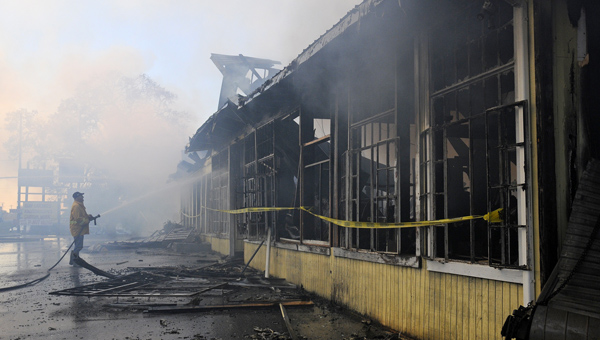 A firefighter works to extinguish a fire that reignited at Adams Glass Studio in Troy, Ala., Wednesday, Nov. 30, 2011. (Messenger Staff Photo/Thomas Graning)

Charles Adams could only stand and watch as the place that had been his home, his hobby and his heart for nearly 60 years went up in flames.

A raging fire destroyed Adams Stained Glass Studio on Highway 231 south of Troy Wednesday morning and closed the doors on the family business that has been a part of Pike County since 1953. It was then that Adams’ dad, Sam, put up a little roadside stand where he sacked pecans and sold watermelons.

As the flames roared through the studio and glass crackled and popped, Adams watched motionless.

“I’m not sure that I’m breathing,” he said. “It’s all going, and I can’t do a thing about it. There won’t be a thing left of all these years. Not a thing.”

Then, he forced a smile. “Memories, I guess.”

There are few people in Pike County over the age of 40 who don’t have memories of “Adams Nut Shop.”

Pike County Commissioner Jimmy Barron shook his head as he watched as firefighters worked furiously to control the flames. 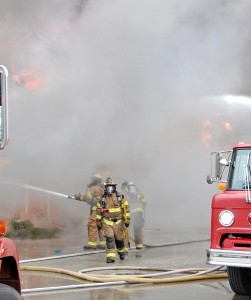 “When I was a little boy we would come out here and get boiled peanuts,” he said. “And Mr. Sam had a mule that worked the cane mill in the fall and, in the summer, they had ice cold watermelons they served in that screened-in room. So many of us have memories of this place. This is a sad day for all Pike County.”

Sam Adams was one of Pike County’s characters and he kept folks entertained with his tales and tricks and, for many years, Adams Nut Shop was a stopping off place for locals and travelers as well.

When Charles Adams, took over the business, he stepped right into his dad’s shoes with his dry wit and humor. And, he, too, had tales to tell. But, the younger Adams’ interest veered from growing gourds in boxes and selling bonnets and brush brooms. Ed Walter, Adams’ teacher and mentor at Troy State College, had introduced him to the wonders of glass art and glass art became a hobby and later his profession and his passion.

“Gone, it’s all gone now,” said Adams’ wife, Mary. “I’m numb. I don’t know the words to say what I’m feeling. It’s devastating. When Charles and I married, he moved me here and he had been here since he was 10 years old.”

Around 1978, Charles and Mary Adams took down the “nut shop” that started as a roadside stand and built the “new” store that would become Adams Glass Studio.

The couple’s house is a stone’s throw from the studio so the studio was an extension of their home and their lives.

“It’s like losing a member of the family,” Mary Adams said. 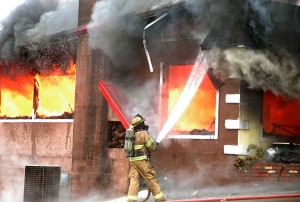 A firefighter battles flames at the scene of a fire at Adams Glass Studio in Troy, Ala., Wednesday, Nov. 30, 2011. (Photo/Wes Johnson)

“The house and the store are all our children and grandchildren have ever known. The two weren’t separate. They were one. Nothing of the store was saved. It’s all gone.”

Linda Jones, who has worked for Adams for about 30 years, watched as a place so near and dear to him and his family and to her became a memory.

Jones was the first to see the fire and notified Adams who was in a different part of the studio.

“We tried to put the fire out but saw that it had already spread,” she said. 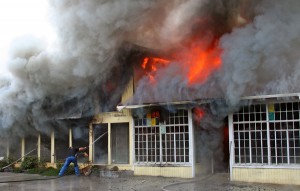 A firefighter battles a fire at Adams Glass Studio in Troy, Ala., Wednesday, Nov. 30, 2011. (Photo/Jaine Treadwell)

Adams called the fire department and he and Jones continued to try to control the fire.

“We couldn’t do it,” Jones said. “The smoke got so thick we had to get out. We did all we could but we just couldn’t put it out. We tried so hard.”

In face of the great loss to him and his family, Adams’ concern was for his customers, his friends.

“I had orders for Christmas gifts that we were working to fill,” he said.

“These were special things that people wanted and, if I can, I will get them done. I don’t know how or when but I will.”

All of the patterns and designs that are signatures of Adams Glass are gone. Charles Adams will have to start again from scratch. Just like when he was a fresh-faced college kid under the tutelage of Mr. Walter in the barracks behind Bibb Graves Hall.

Forever, the son of Sam, Adams took a deep breath. “Well, nobody can say we didn’t go out with a blast.”

Then he wiped his eyes.