CHHS picks up win over Greenville 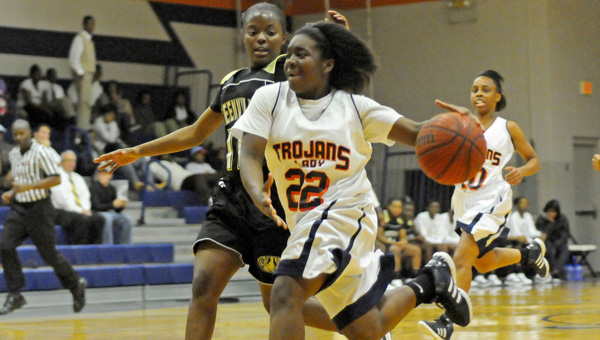 The Trojans put up a strong defense in the first half, keeping the Tigers contained and restricting their scoring to mainly free throw shots.

In fact, only four of the Tigers 11 first period points were offensive scores, the rest coming in from free throw shots.

The Trojans on the other hand went on the attack early, putting up a nine-point lead to distance themselves from the Tiger attack.

The Tigers were able to fight back however, bringing the score within one point to end the first period, and taking their first lead of the night in the opening seconds of the second.

From there, the two teams traded shots as well as the lead, which changed hands three more times throughout the second period before the Trojans could get control for good.

The Trojans were only one point ahead of the Tigers toward the end of the second period, but a small rally that included back-to-back shots from Maya Monriston put the Trojans up by five to end the first half of play.

Opening the third period of play the Trojans were able to keep a small margin over the Tigers, never allowing them to get within less than three points.

Trojan player Camille Morton led the attack for the night, scoring 13 of the Trojans points and going one for three on free throws.

Following Morton was a combination of Monriston and Asiah Reeves, each of who brought in 8 points for the Trojans.

Monriston went one for four on free throws while Reeves brought in four on eight attempts.

The victory gives the Trojans a 1-3 record for the season, which they will look to improve on when they take on Dothan at home on Friday, Dec. 2.