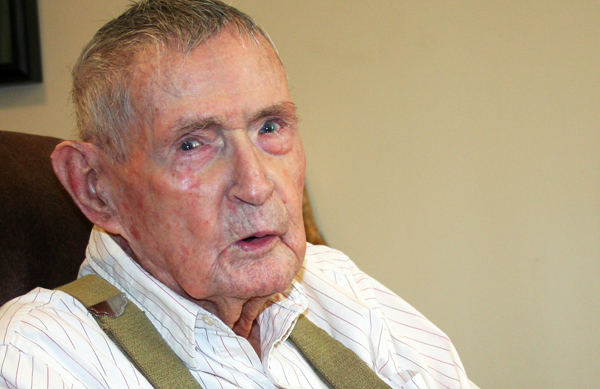 At 100 years young, Jerold Brantley was honored by the Farm-City Committee for his lifetime of service to agriculture.

At age 100, Jerold Brantley can’t stand on the street for more than 30 minutes before he has to “lean up against something.”

Brantley was recognized at the Pike County Farm-City Banquet for 100 years of contributions to Pike County agriculture. The banquet was sponsored by the PIke County Chamber of Commerce Farm-City Committee and the Troy Kiwanis Club.

Brantley was very appreciative and thanked the committee kindly, but still said no to the request to make a “little speech.”

“I don’t get up and speak,” Brantley said, laughing, “I might slip and say a ‘cuss’ word.”

Brantley grew up during a time when, “if you didn’t throw in a cuss word or two, folks didn’t think you knew what you were talking about.” That’s not a habit that he has been able to break and it’s a part of what makes Jerold Brantley one of Pike County’s favorite “characters” and one of its best “talkers.”

Brantley was born at four o’clock in the morning on June 7, 1911, “way out in the country” toward Josie.

He was one of eight children and the last boy born. His “pa” died when he was only 6 years old.

“Mama had a real hard time making a go of it,” he said. “She didn’t have much education and times were hard but one good thing was that she never had eight mouths to feed, clothe and try to keep out of jail. Some of my brothers and sisters were already gone from home when my pa died.

The children had chores to do and Brantley said he assumed all the little boy duties except milking the cow.

“I wasn’t smart, but I was smart enough not to learn to milk a cow,” he said, laughing. “I’d wander around in the woods and run wild and do all I could not to go to school. My sister Mag was my teacher and we had to walk to school. If I didn’t get ready in time to walk with her, I just wouldn’t go to school that day.”

Brantley said he didn’t like school and didn’t do well.

“I’d rather plow the mule than go to school,” he said. “We had a mule, Emma, that you had to kick to make her move. I kept a hammer on the heel bolt in case I needed it. Sometimes, I’d throw it at Emma, but she would just dodge it.”

“But I’d rather be behind a mule than sitting up in school,” he said.

Brantley’s most memorable thing about school was the day he changed the spelling of his name.

“I was Gerald Brantley until a girl, Gerald McLendon, came to school,” he said. “I didn’t want the same name as a girl. So, I elected to spell my name Jerold.”

Brantley said “Sister Mag” and other very good teachers tried to teach him something but they couldn’t.

“I failed at Banks so they thought if I went to Troy they might could learn me something up there, but I failed in Troy, too,” he said. “That didn’t bother me a bit. I wound up in Brundidge, but I didn’t absorb anything there either but I did play football and did pretty good at it.”

Being from the Banks area and with no transportation, Brantley said he and William Smith had to walk home everyday after football practice unless they could catch a ride.

“Mr. Charlie Dickert had the lumber company in Brundidge and he was running trucks up and down the roads,” Brantley said. “If we were lucky, a truck would be leaving the sawmill and going toward Banks and would pick us up. If not, we had to walk but that didn’t hurt us one bit.”

When it was time to graduate, Brantley said the teachers decided to let him go on.

“They said I was bigger than all the rest and that I was so hard-headed they would just let me go,” he said, laughing, “but I didn’t have the grades.”

Brantley headed back to the farm with a “little knowledge” and a great sense for adventure.

He once paid 50 cents to fly with a barn stormer who had to dodge the oil that was leaking from the engine just to be able to see to fly the cheap plane.

“He took off and landed in a cotton field where the cotton stalks were still standing,” Brantley said. “We’d be going out through the field with cotton stalks and burrs flying up all around us. It was fantastic.”

Then, the “world was at war” and Brantley wanted to join the Army but he was married with a son and another baby on the way.

“I wanted to volunteer for the Army as soon as our other baby was born,” he said. “But before I got around to it, another baby was on the way.

“I went around everywhere saying that I wanted to be over there, kill me six Germans and come home. It didn’t work like that.”

Brantley had a wife and three children but he wanted to serve his country. That was important to him.

He served as combat engineer who saw too much death and dying. His battalion fought its way along the Rhine River. Brantley received the Silver Star, which is the third-highest combat military decoration that is awarded for valor in the face of the enemy.

Brantley doesn’t talk too much about his wartime experiences. He would much rather talk about the “railroad” watch his mother gave him that he kept as a reminder of the loved ones back home.

“Mama gave me that watch for not smoking or drinking whiskey before I was 21,” he said.

Brantley knew that he was blessed to come home from the war.

“The first corpse I saw all torn up really got to me,” he said. “Then, when I got home, a man from here came home the same way and they couldn’t open his casket. That brought the war right back.”

Brantley found his way back to the farm and served on the draft board – “and that’s another story.” He farmed and worked in forestry and found everything to be “interesting and worth talking about.”

He said that he has lived a good, long life and he has the Lord to thank more than anything else.

“Genes have more to do with a long life than anything,” he said. “But hard work plays a big part. You can’t work a man to death if likes what he does. I’ve always liked what I did and tried to do it as good as I could.”

Brantley said he’s never been one who thinks too highly of himself.

“I don’t have one of those politician smiles that you can turn on and off,” he said. “People know who you are and who you ain’t. You don’t have to blow your own horn.”

Spirit of a champion