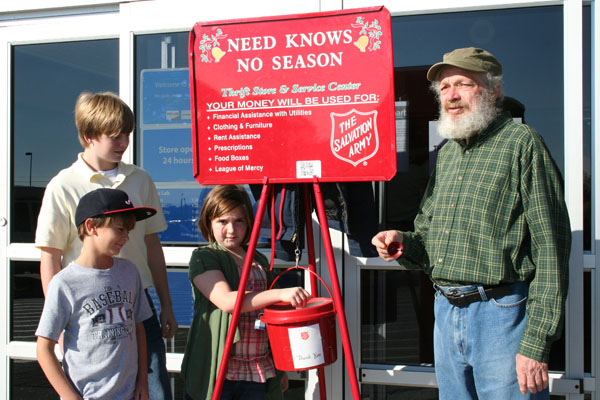 Johnny Locklar welcomed some young donors to the Salvation Army Kettle this week.

The ringing of the Salvation Army’s bell is one of the first “sounds of the season.”

The Salvation Army bell-ringers begin ringing the weekend before Thanksgiving and that officially marks the beginning of the Salvation Army’s annual Red Kettle Campaign and the Christmas season.

“The Red Kettle Campaign is our largest fundraiser of the year and we depend on it to carry us through the year,” said Kim May, Pike County Salvation Army director.

To encourage giving this holiday season, May said that the kettles at Wal-Mart on Saturday will be crimson and white and orange and blue.

“We are going to see which fans are the more generous givers to our kettle campaign, Auburn fans or Alabama fans,” May said. “We will have an Auburn kettle and an Alabama kettle. At the end of the day, we’ll count the donations and see which team’s fans gave the most.”

May’s hopes are that the giving will be highly spirited and a big boost to the kettle campaign which is manned totally by volunteers.

Volunteers are vital to a successful Red Kettle Campaign and May said there are never enough volunteers for the fundraising campaign which will end on Christmas Eve.

“We ring at Wal-Mart from 9 a.m. until 5 p.m . Monday through Saturday and from 9 a.m. until 5 p.m. on Fridays and Saturdays at Food World and Piggly Wiggly 231, if we have enough volunteers,” May said. “The Brundidge Rotary Club rings at the Brundidge Piggly Wiggly on Fridays and Saturdays so that site is always taken care of.”

Currently, the need for volunteers is great, especially for the weekend slots at Food World and Piggly Wiggly.

“These are great opportunities for church groups, civic organizations, school groups and youth groups to do something to help those in need in our community,” May said. “The money that is raised through the Pike County Salvation Army’s Red Kettle Campaign stays here at home to help our friends and neighbors.”

The bell ringers’ shifts are scheduled for two hours but groups can take blocks of time and set their work schedules during that time block.

There is also a need for people to adopt kids who are on the Salvation Army’s Angel Tree.

“We had 150 kids to quality for our Angel Tree program and we still have about 50 kids who need to be adopted,” May said. “We need volunteers for our Red Kettle Campaign, people to adopt our ‘angels’ and donations. We appreciate everyone who helps to make this Christmas season brighter for so many of those in need.”