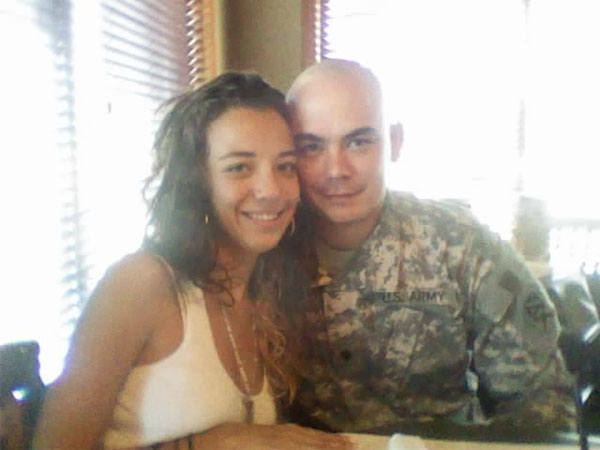 For Martha Garcia and her fiancee, Drake Sanders, this Thanksgiving holds special meaning.

For Larry Davis, every day is Thanksgiving.

Just knowing that his son, Al, is down the road working is nothing short of a blessing.

Al Davis is a member of the 900th Maintenance Company in Brundidge that was deployed to Afghanistan for a year’s tour of duty. He returned home with 169 other members of the unit this summer.

“It sure is good to have Al back home,” Davis said. “For a year, every morning when I got up, the first thing I did was go turn on the television and see what was going on in Afghanistan. Now, I know he’s just down the road here in Brundidge and that’s a real good feeling. We’ve done a lot of fishing and socializing since Al got home. It’s Thanksgiving every day around here. We are blessed.”

Davis still keeps a close eye on what’s going on in Afghanistan because “like most folks around here,” he’s very patriotic.

The senior Davis served with the 900th Maintenance Company in Saudi Arabia during Desert Storm and Al served there with him.

“I’m proud of Al and the job that he did with the 900th and that he takes pride in God and country and is willing to do what our country wants done.”

Through his son’s willingness to continue to serve his country, Davis now knows what it is like for those “who also serve by waiting.”

“It’s just about harder to be waiting here at home not knowing,” he said and added that he now has a greater understanding and appreciation of those who wait.

Martha Garcia knows something about waiting.

She had only known Drake Sanders of Goshen for about two months before he was deployed to Afghanistan with the 900th Maintenance Company.

But it was love at first sight, she said, and being apart from him almost tore her heart apart.

“Two of my cousins, Pablo Granados and Juan Garcia, were also deployed,” Garcia said. “Seeing them go was very hard, too, and my heart hurt for all of them.”

Garcia had moved to Goshen only a short time before the deployment of the 900th and she never expected that the deployment would be so personal for her.

“Granados grew up here but Garcia and I moved here from Fort Lauderdale about three or four months before the 900th was deployed,” she said.

And, things could have been different for the couple had Sanders not transferred to the Brundidge unit.

“Drake was in the Troy unit but they needed more people in the 900th so he transferred,” Garcia said. “He volunteered to go. He wanted to be a part of the deployment and have the experience of serving his country in a place like that.”

Garcia knew Sanders was in a dangerous country and that he could be in danger himself.

“It was bittersweet knowing that he was there,” she said. “I was proud that he was over there doing his part in the fight for freedom but I was expecting the worst. So, I was always praying that God would watch over him and all the soldiers. I prayed that God would be with them every step of the way.”

Garcia said that being in Afghanistan was a culture shock for Sanders because the people were very different.

“But all of the soldiers became like a family,” she said. “They watched each other’s back. They were deployed as one unit and they could relate to each other. They were family and that was a blessing.”

After about six months in Afghanistan, Sanders got to come home on a two-week leave.

The couple’s wedding is being planned for early in 2012 and, as they look forward to a life together, they will offer prayers of thanksgiving today for all the blessing they have received and for the opportunity to live in a country and serve a country that honors freedom and life, liberty and the pursuit of happiness.