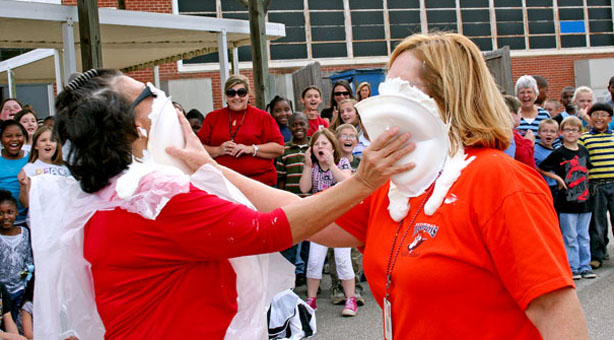 A pie in the face capped off the Goshen Elementary reading contest.

Two good sports – one for Alabama and one for Auburn – got a pie in the face.

Goshen Elementary School Principal Wanda Corley and Librarian Susan Renfroe have done a lot of talking trash during the past few weeks and on Tuesday each paid the other back for what had been said.

Just before the bell rang to dismiss school, the GES students gathered behind the gym with University of Alabama fans on one side of the road and Auburn University fans on the other.

Between them stood Corley sporting crimson and white and Renfroe decked out in orange blue. They were waiting for what was coming to them.

The school principal and librarian had taken sides in the Iron Bowl gridiron clash to be played on “The Plains” Saturday as a way to encourage the students to “Be a Champion and Read.”

Seventy percent of the students at GES participated in the “Be a Champion and Read” contest” sponsored by the Alabama Department of Education.

“The goal of the contest was to get students excited about reading,” Renfroe said. “The ‘Be a Champion and Read’ contest challenged the students in kindergarten through eighth grade to read eight, reading level appropriate books, to qualify for one grand prize – three tickets to the Iron Bowl and a visit to the field during the pre-game activities. There would be one Alabama and one Auburn winner.”

But Corley said that all of the students who participated in the contest were winners.

“And, we had a lot of winners because our students read more than 3,200 books over the eight weeks of the contest,” she said.

The GES students enjoy reading and don’t need a lot of encouragement.

“Mrs. Renfroe is the best librarian anywhere,” Corley said. “She has students standing at the library door waiting to get in every morning. If she were here at 6 a.m., the students would be here waiting.”

No matter how motivated the students are, a little extra encouragement never hurts. So, Corley and Renfroe gave the students some added incentive with a little contest of their own. Each time a student read a book and tested 85 percent or better on reading comprehension, his or her name was read on the intercom, “Reading today for Alabama …” or “Reading today for Auburn …” and a point was awarded to that team’s “captain,” Corley or Renfroe.

The loser of the Corley/Renfroe contest was to get a pie in the face tossed by the winning “captain.”

But, being the good sport that she is, Corley didn’t want to “rub it in” so she agreed to take a pie in the face from Renfroe.

That’s where they found themselves Tuesday afternoon, fact-to-face and holding a cream pie in the ready position. The next thing they knew, Corley and Renfroe were wiping pie from their eyes as the students yelled, “Roll Tide!” and War Eagle!”

“Our contest added some fun to the ‘Be a Champion and Read’ contest and it also was an added encouragement for the students to read,” Renfroe said. “The contest involved our parents because they had to sign the sheet verifying that their child had read the eight books listed. The sheet was also signed by the classroom teacher. The competition was a lot of fun and it got our students reading more and the parents involved and that’s the way we like to do things at GES.”