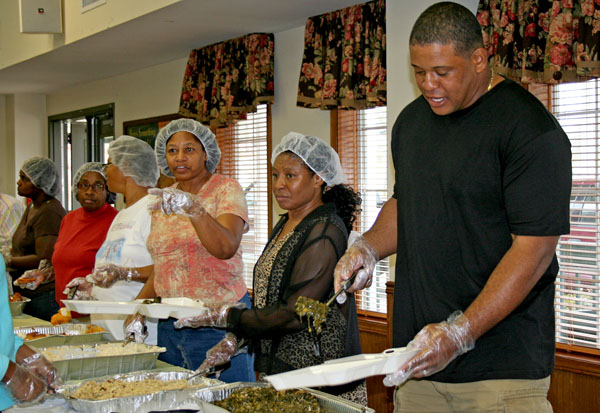 For the 11th year in a row, Cornelius Griffin and his family helped prepare and distribute meals for the eldery and shut-ins in Brundidge.

Annie Ree Hall slowly opened the door of her home and a smile quickly spread across her face.

“My baby!” she said as she reached up and put her arms around the young man who on her porch.

Cornelius Griffin doesn’t get to deliver many meals to the elderly, the sick and shut-ins in the Brundidge community at Thanksgiving. There are just too many of them, 600 or more. But he does make sure that he gets his share of deliveries.

If Griffin could deliver every meal, he would because the people of the Brundidge community are very special to him.

“The people of Brundidge have supported and encouraged me as long as I can remember,” he said. “I’ve known Ms. Annie Ree all my life. She’s one of my biggest fans. She and all the others like her are the reason for the Thanksgiving dinner.”

Every year since 2002, Griffin has hosted Thanksgiving dinner for the elderly and those in need in the Brundidge area.

After a stellar career at the University of Alabama, Griffin was drafted by the New York Giants of the National Football League in 2001. As Thanksgiving neared, he found himself far from home in a big, icy cold city. His thoughts turned to home, family and friends.

“That’s when I had the idea of having Thanksgiving dinner for the elderly in the Brundidge community, and the sick and shut-ins,” Griffin said. “But it was too late to get it together.”

But, the next year, Griffin was ready. Although he was too far from home to be personally involved with preparing the meal, he could provide the money for the meal. He just needed someone to prepare the food. So, he enlisted the help of his mom, Martha Griffin, and she gathered up her children and the ladies at Lily White Church and the Jerusalem Temple and together they prepared a Thanksgiving meal for about 400 people.

On Tuesday, the Griffins and Company were back at work and more than 600 meals were prepared and delivered to area residents, with another 50 or more served on site at Brundidge Stations.

Griffin and Bishop S.D. James, Jerusalem Temple, provided another 70 Thanksgiving meal boxes with turkeys and the trimmings to those in need in Pike County.

For Cornelius Griffin, Thanksgiving 2011 was his third opportunity to be involved “hands-on” with the Thanksgiving meal.

Griffin said that he was blessed to be able to live his dream of playing professional football.

“The odds were against it,” he said. “I would have had a better chance of winning the lottery. But all the way through my football career, I laid it on the line and the coaches found favor in me.”

Griffin said when he retired from the NFL, we wanted to come back home.

“I wanted the kids to know that if I could do it, they could, too,” he said. “It you work hard and stay focused on your goal, you can make it.

“Having faith in God and being comfortable with who you are and with your abilities gets you where you want to go,” he said. “I came home because this is where I want to be. I don’t have to live in a big city. I can get anywhere in the world from Brundidge, Alabama. And that’s what I want kids to know. It doesn’t matter if you are from a small, rural Alabama town. You can get anywhere from here.”

Charles Adams has created a special angel in memory of EB Johnson for his 2011 collectible angel. In 1980, Troy... read more