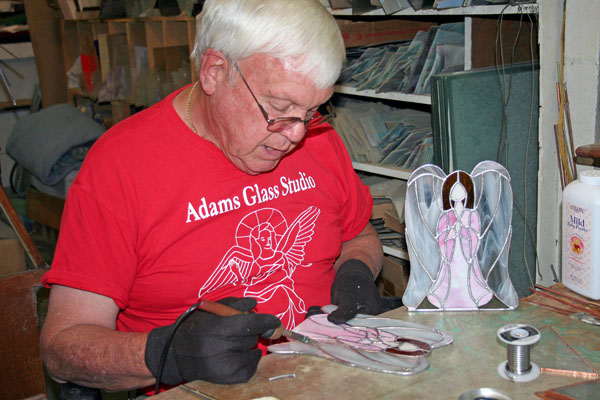 Charles Adams has created a special angel in memory of EB Johnson for his 2011 collectible angel.

In 1980, Troy stained glass artist Charles Adams began naming his Christmas collection angels after people who are important in his life – his children, other family members, friends and those who have made a positive impact without even knowing it.

Each angel has been special but none more special than the 2011 Christmas Angel that will be unveiled at Adams Glass Open House over the weekend.

“This year’s featured angel will be EBJ,” Adams said. “Little EB lost her battle with cancer in April but all across the county you can still see the ‘Love EBJ’ signs. Those signs remind us of EB and her courageous fight and all of the others who called into the fight.”

Adams created a stained glass angel for Erin Brynn Johnson’s gravestone and wanted to honor EBJ’s memory with a Christmas angel. He talked with her mom, Marla Johnson, who assured him that it would be all right with the family.

“I’ve never done an angel that means more than this one,” Adams said.

Adams Christmas angels are collectibles and include notables such as Betty Wagoner, the grand dame of Charles Henderson High, and as obscure as “the kid next door.”

Adams stained glass creations can be found in homes and churches all across Alabama and far beyond.

“At Open House, we have stained glass clocks, panels, sun catchers, nightlights, kaleidoscopes and jewelry along with the Christmas creations,” Adams said. “This year, Walter Black will be a featured artist with his ceramics and Carol McCrady with her papyrus angels. Rex Thrash will have his handcrafted walking sticks and bird houses and one of his birdhouses is a new design and very unique.”

“This will probably be the last year that we will be able to have Ed Walter’s glass,” he said. “There aren’t many pieces left and they will remain the family.”

Adams Glass Open House will open with a wine and cheese party from 6 until 8 p.m. Friday and continue from 9 a.m. until 4 p.m. Saturday and from 1 until 4 p.m. Sunday.

Everyone is invited to the Open House, which has become a holiday tradition for many.

A pie in the face capped off the Goshen Elementary reading contest. Two good sports – one for Alabama and... read more