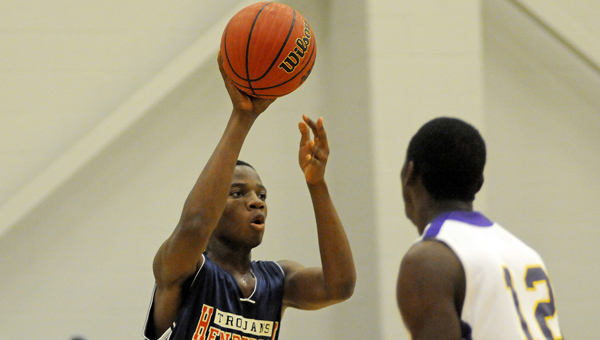 ENTERPRISE – Despite a slow start, Charles Henderson kicked things into high gear and routed Tallassee, 88-38, in the second round of the Enterprise Thanksgiving Tournament.

The Trojans (1-2) fell to Central-Phenix City in the opening round Saturday, forcing Charles Henderson into the losers bracket.

Tallassee jumped out to an early 7-2 lead before Robert Lee knocked down an 8-foot jump shot to begin a 15-1 run to end the first quarter.

Tyler Mitchell was anything but average as he overwhelmed the Tiger defense, scoring 30 pints for the Trojans, 22 coming in the first half.

The Tigers pulled back to within seven early in the second quarter but a string of three pointers by Mitchell and Devonta Jordan quelled the Tiger rally.

Mitchell went on a run of his own beginning at the end of the opening quarter. The junior scored 22 of the team’s 34 points during a n 11-minute stretch.

Charles Henderson also used the three-point shot to their advantage, hitting 9-of-16 for the game.

The Trojans led 47-20 at half time and picked up in the third quarter right where they left off.

Devonta Jordan drilled a three to open the second half and what little air was left in the Tigers escaped the gymnasium.

Jordan would finish with 23 points on the night. Lee added eight for the Trojans.

All was not well on the Trojan bench, however. In true Carl Hollis style, the coach saw areas where improvement was needed.

“We weren’t as aggressive as I’d like to be defensively,” he said. “I thought we got complacent.”

If Charles Henderson became complacent, someone forgot to tell Tallassee. Things would only get worse for the Tigers as the Trojans outscored their opponent 26-6 in the third quarter.

“Tallassee has a young team,” Hollis said. “They’ll get better but I thought we took advantage of that.”

Charles Henderson did show one weakness. The Trojans only knocked down 14-of-28 free throws.

“We missed a lot of free throws,” said Hollis. “We still have a lot of room for improvement.”

The Trojans will face off against Red Level at noon today in the fifth place game.

Today will mark the final day of the three day tournament.