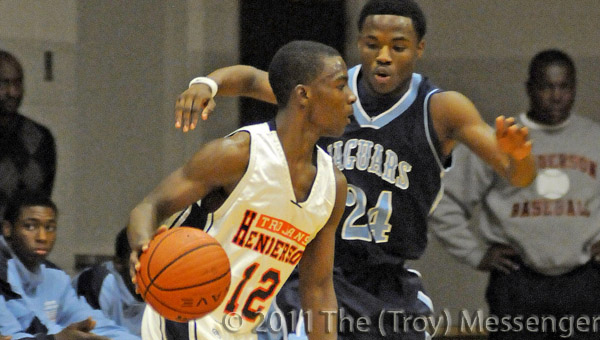 Charles Henderson gave the defending 2A runner-up a run but in the end could not muster enough firepower to knock off Barbour County falling, 66-47, in the Trojans season-opener at Wagoner Hall on Friday.

With the game tied 18-18, Tyler Mitchell scored four quick points to give the Trojans their largest lead of the contest, 22-18. The teams would trade baskets before Barbour County began a 14-1 run to end the first half.

“I think we showed some fatigue,” head coach Carl Hollis said. “They are going to make their shots, we have to learn to get a body on them and not allow open looks.”

The Jaguars (2-0) would rotate 10 players against Charles Henderson in the first half, giving Barbour County fresh bodies to combat the Trojans defensive pressure.

The Jaguars would extend their run to 20-1 coming out of halftime before Charles Henderson could slow down the relentless attack.

“We went to a zone to preserve our defense,” Hollis said. “We just didn’t matchup well against them. We didn’t contest outside shots.”

Barbour County would knock down nine threes for the game.

The Trojans (0-1), behind Mitchell’s 19 points, pulled to within 10 early in the fourth quarter but foul trouble forced Charles Henderson to go deep onto their bench.

Barbour County standout Takwain Whigham took full advantage of the free-throw line scoring 11 of his 20 points from the charity stripe.

“I saw some good things in the first half,” Hollis said. “We just looked to go flat in the second half.”

CHHS would struggle shooting late as well, making just one of 14 three-point attempts in the second half and netted just 41 percent of their total shots for the game.

“I thought we shot poorly,” said Hollis. “We didn’t show the patience we have been talking about.”

Mitchell finished with a double-double scoring 19 and hauled in 13 rebounds. He also picked up five steals.

Davantez Jackson scored 11 for the Trojans to go along with his five rebounds.

Charles Henderson will travel to Enterprise today to take on Central-Phenix City in the Enterprise Wildcat thanksgiving Tournament.

“Central is going to come in and play like a college team,” said Hollis. “They are going to be physical and move the basketball until they get a good shot.”

Camille Martin followed with five and Asiah Reaves had four.

Bulldogs fall to Carroll in home-opener