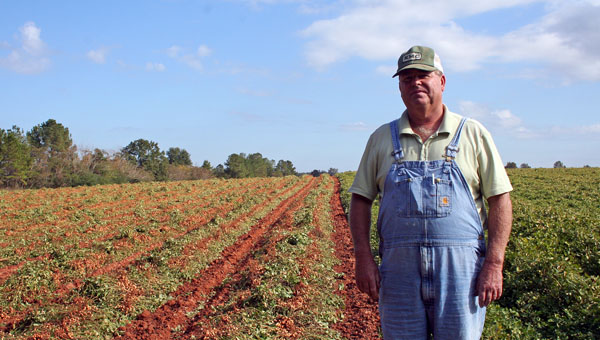 Mike Dubose was named row crop farmer of the year.

Editor’s note: Mike Dubose was named row crop farmer of the year at the Farm-City Awards Banquet hosted by the Kiwanis Club and the Pike County Chamber of Commerce.

Mike Dubose grew up in the Bank’s community of Pike County where he lives and farms today.

Dubose began farming in 1974 with five acres of peanuts.

“It’s not fall without peanuts,” Dubose said, with a smile. “I wanted to stay in peanuts if I could. My plan was to increase my peanut acreage each year.

Dubose also has an additional 135 acres of peanuts on halves with his son, Jake.

With the help of his family, Dubose also has four broiler houses and 90 brood cows.

Dubose maintains a diversified operation, which helps him to be successful in agriculture today.

“If you are going to be successful in farming, you’ve just about got to diversify,” he said. “Chickens are good because they provide more of a steady income. An irrigation system may not guarantee a good crop but it helps to be able to get some water on the ground.”

Dubose is a conscientious farmer.

“I follow good farming practices for conservation and the best yields possible,” he said.

Dubose is a member of Alfa, the Pike County Cattlemen’s Association, Farmers Co-op and the Alabama Peanut Producers Association.

He and his family attend First Baptist Church in Troy.

Dubose and his wife, Mary, have two children, a son, Jake, who works with the Troy Fire Department and farms with him, and a daughter, Morgan, who is attending Troy University studying education.

Christmas is a month after Thanksgiving but shoeboxes for Operation Christmas Child must be wrapped and ready no later than... read more