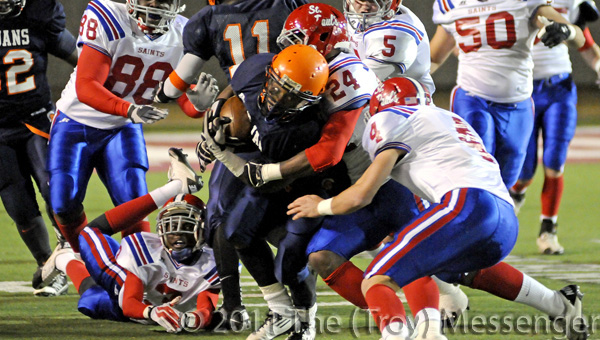 On the back of a strong second half, St. Paul’s eliminated Charles Henderson from the AHSAA playoffs, 31-0, on a cool night at Veterans Memorial Stadium in Troy.

It took just over 27 minutes for St. Paul’s to score the game’s first points but once they did, on a William Brabston 1-yard quarterback sneak, the Saints never looked back.

“We never could get anything going offensively,” head coach Hugh Fountain said. “I think we just ran out of gas in the second half.”

Anthony Siler thwarted the Saints opening drive with an interception at the Trojans 19 but Charles Henderson failed to gain a first down and were forced to punt.

St. Paul’s (11-1) had a chance to get on the board in the second quarter. 8th grade running back Ostin McPherson broke a 43-yard run to the Charles Henderson 24. After the drive stalled, a 38-yard field goal attempt missed, striking the right upright.

After returning from the locker room at halftime in a scoreless deadlock, Charles Henderson (6-6) punted to the Saints following a three-and-out. Kylen Towner’s 54-yard return gave St. Paul’s great starting field position at the Charles Henderson 24. Three plays later, Brabston was in the endzone to give St. Paul’s a 7-0 lead.

“We made a mistake when we kicked it to their playmaker,” Fountain said. “That gave them life and good field position.”

It didn’t take long for the Saints to add on. The Trojans ran three plays and again punted. McPherson scored on a 10-yard run with 8:13 remaining in the third quarter, giving the Saints a 14-0 advantage.

It was the Ostin McPherson show the rest of the way as the running back rushed for 225 yards on the night, 157 of which came in the second half, on 31 carries.

Jannick Wildraut booted a 34-yard field goal to extend the Saints lead to 17-0. Austin Mosley would add a 4-yard touchdown run to cap the scoring for St. Paul’s.

“They just beat us up front,” said Fountain. “We are a running team and they just stopped us.”

Courtney Downing and Stanley Crawford rushed for a combined 34 yards.

St. Paul’s will play Hueytown in the quarterfinals.