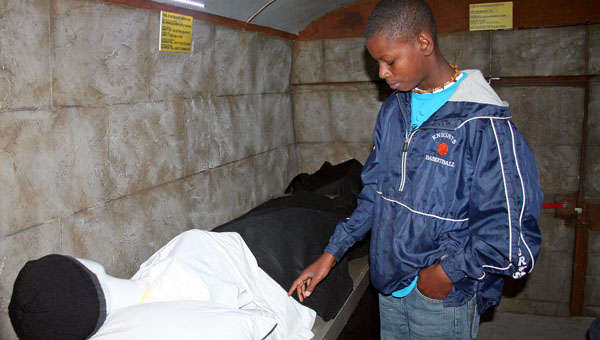 The Choice Bus rolled on the campus of Pike County High School Thursday morning and, when pulled off several hours later, Principal Willie Wright was confident that it had left a deep and lasting impression on his students.

“I believe what the students saw and heard today will have a positive effect on their future,” Wright said. “We talk about choices and how the choices the students make can provide them opportunities to be successful or can keep them from being successful.”

The Choice Bus was brought to PCHS through a grant program with State Farm and was initiated by Sharon Sullivan, PCHS faculty member.

“We want our students to understand the power of education,” Sullivan said. “The Choice Bus allows them to better understand what happens when students drop out of school and lose that power.”

The Choice Bus concept was developed by Dr. Shelley Stewart, founder and president of The Mattie C. Stewart Foundation. Stewart chose the path less traveled as a way to reduce the escalating high school dropout rate.

Stewart’s “InsideOut” documentary uses prison inmates as messengers who encourage young people to get an education. To make the consequences of dropping out of school more tangible, the Mattie C. Stewart Foundation built The Choice Bus, which is the nation’s first mobile experience dedicated to reducing the dropout rate.

John Paul Taylor was the presenter on The Choice Bus Thursday and he commanded the attention of the students ads they “rode” the dropout route with him, first via the “InsideOut” documentary and then as they toured a simulated prison cell.

“Every day we make choices,” Taylor said. “One choice that we make can help us to realize our dreams or cause us to live a nightmare. That choice is to stay in school or drop out. It’s a choice that will affect the rest of your lives.”

Taylor made it very plain to the students that prison is not a place one wants to be.

“You have no freedoms, no privileges, no choices, no control,” he sad. “You can’t do anything as simple as flipping a light switch. Even that is out of your control.”

Taylor said the lack of privacy is something that inmates have difficultly in accepting.

“You are in a cell with usually three other inmates,” he said. “You share a toilet and sink and there is no curtain to give you privacy. Your cellmates see everything that you do and, then you are watched by prison guards 24 hours a day. That’s the kind of life you live in prison.”

Sullivan said the students seemed to be receptive of the messages that were sent their way.

Most of the students signed a pledge card with their intentions to stay in school and Sullivan said she hopes they will stand by those pledges.

“But even if this Choice Bus keeps just three or four students in school, then it’s worth it,” she said.

Lynn Smelley, Mattie Stewart Foundation program manager, said there are three Choice busses that travel across the country carrying the message of the power of education.

State Farm and Buffalo Rock are bus sponsors along with Shelby County in Alabama.

“When we finish this year in December, we will have take the message that staying in school will help keep you out of prison to one million students since The Choice Bus got on the road in 2008,” Smelley said. “More than five million students have seen the InsideOut documentary. Next year, we hope to add another bus and that will enable us get the message before more students.”

Smelley said the The Choice Bus objectives are to help students understand the link between dropping out of school and the likelihood of spending time in prison and the importance of making good decisions.

“The Choice Bus program also encourages students to finish high school and opens their eyes to the opportunities that await those with an education,” he said.

Troy parade to be ‘storybook’ event