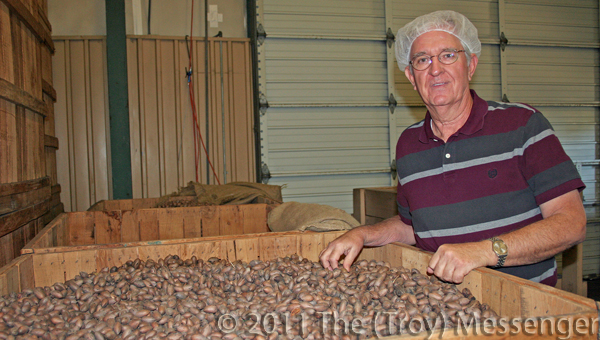 Bob Whaley of Whaley Pecan said a growing demand for pecans, particularly in places such as China, has bumped up the prices paid for the crops locally. With 30 percent of the U.S. pecan crop going to China demand is high for premium pecans. (Photo/Jaine Treadwell)

If you think money doesn’t grow on trees evidently you aren’t the the proud possessor of yard pecan trees.

Because this year those nuts are golden.

Elliots are bringing as much as $1.50 a pound and reportedly are hovering around $3 a pound in the state of Georgia.

And Bob Whaley, owner of Whaley Pecans in Troy, said producers have the Chinese to thank for the high prices they are receiving.

“About three years ago, the walnut supply in China was limited, so the Chinese decided to try pecans and the people went crazy over them,” Whaley said. “So much so that now about 30 percent of the pecan crop in the United States is going to China each year.”

The increased demand for pecans on the foreign market, where buyers are willing to pay top dollar for the nuts, has driven the price being paid to producers to the highest level in the history of the industry.

“It’s simply an issue of supply and demand,” Whaley said. “There’s a huge demand from the foreign market and they are willing to pay a huge price and that has shot up the price. When the supply is limited, the price is high. China is buying huge amounts of pecans produced in the United States and often entire orchards.”

“They are called peeling nuts because they almost peeled like a banana,” he said. “The pecans are cracked and then soaked in a sweet and sour sauce or brine. Then they are baked until they are dry and crunchy and put in one-pound bags and sold in the grocery stores right along with frogs, eels, turkeys and anything else you would want to eat.”

Whaley attended the SIAL Trade Show in Shanghai in May and shared information about the United State pecan industry with those who visited the U.S. Pecan Booth.

“It was a very interesting experience,” Whaley said. “I learned a lot about the effect foreign markets will have on the pecan industry. The Chinese are very interested in pecans because of their health benefits. Pecans have been found to improve overall health, including brain function. Pecans are extremely healthy. So, in China, pecans are called the ‘longevity’ nut.”

Also contributing to the high prices of pecans this season was the drought in Texas, which is one of the nation’s largest producers of pecans.

Georgia is the largest pecan producing state and Arizona and New Mexico are also huge producers.

“Arizona and New Mexico producers irrigate and they are high density producers and have a tremendous impact on the pecan industry,” Whaley said.

Whaley said the demand for pecans is expected to be great in the coming years and it will be seven to 10 years before the supply can catch up.

“A lot of pecan trees are being planted and the trend will continue because the demand is there,” Whaley said. “Pecans have become somewhat of a delicacy item because of the health issues and because foreign buyers are willing to pay top dollar for them. We (Whaley Pecan Company) are paying more for pecans now because we had the choice of buying high or not buying. We are in the pecan business so we have to buy.”

Pecan harvest season is an especially busy time of year for the pecan industry and Whaley said this year is no exception.

“It’s hard to keep up with the demand right now,” he said. “We are a shelling plant and we’re already behind.”

In shell pecans were stacked high at Whaley’s Friday afternoon and more were coming in 1,500-pound super sacks and wooden crates.

The Pike County Teen Safe Driving group is planning a book dedicated to the memory of teenagers who lost their... read more