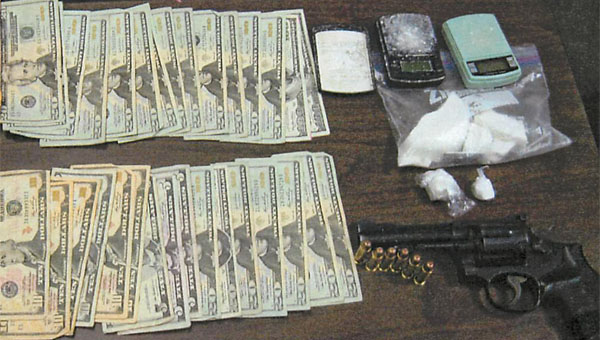 Suspected cocaine, cash and stolen gun were among items recovered in the raid.

A stolen handgun, $600 in cash and a significant amount of suspected cocaine were seized in a drug raid on Monday.

Troy Police, working with the 12th Judicial Task Force, executed a search warrant in the 300 block of Orion Street at approximately 2 p.m. Monday, according to information from Chief Jimmy Ennis.

Demtriss Santel Potts, 31, of Troy, was at the residence at the time. He was arrested andcharged with drug trafficking (cocaine) and receiving stolen property.

According to a statement from Troy Police, officers recovered a handgund that had been reported stolen in Crenshaw County, a “large amount” of compressed material which field tested as cocaine and two sets of digital scales with residue. Officers also seized more than $600 in cash.

Potts was bein gheld in the Pike County Jail on $50,000 bond in the drug trafficking charge and $1,500 bond for the receiving stolen property charge. He also was placed under a hold by Alabama Probation and Parole because of these new charges.

Police said the investigation and arrest were a joint effort between the TPD Emergency Response Team, TPD narcotics officers and the 12th Judicial Circuit Drug Task Force, along with other TPD personnel.