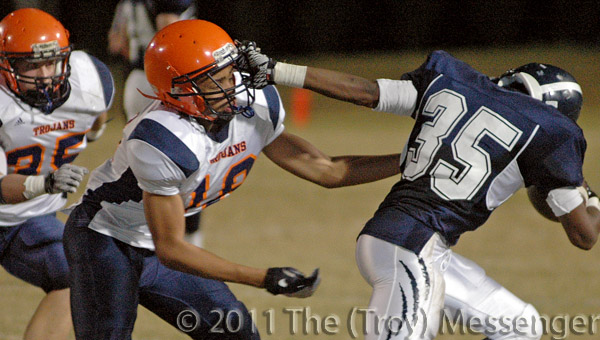 ENTERPRISE – Charles Henderson High School fought through missed opportunities, costly penalties and a hostile environment, but ultimately fell to Enterprise on the road 24-17.

The Trojans fall to 5-5 on the regular season, but will travel to Demopolis for the first round of the AHSAA playoffs next week.

The Trojans found it hard to gain momentum in the first half as they were flagged five times for 55 yards, in comparison to zero flags against the Wildcats.

“We made too many mistakes,” head coach Hugh Fountain said after the game. “We’ve hurt ourselves at times this season, and we made a couple more mistakes tonight.”

Charles Henderson started out strong as Tederion Myhand intercepted a Wildcat pass on the game’s opening drive. Six plays later, the Trojans were in the endzone on a Stanley Crawford 1-yard run to give the Trojans an early 7-0 lead.

Enterprise came to life in the second quarter when they held the Trojans to a three-and-out and forced CHHS to punt from their own 6-yard line. The snap from Charles Henderson’s third string long snapper, who was called into action due to injury, forced punter Nathaniel Salmon to his right, giving the Wildcats enough time to reach the kick blocking the punt in the endzone and recovering it for a touchdown.

“That play really killed our momentum,” Fountain said. “That was a big play for them. I thought our guy did a good job snapping the ball tonight, considering he hasn’t done it all year.”

On the ensuing drive, the Trojans saw a golden opportunity to regain the lead on a Courtney Downing 60-yard run to the Enterprise 20 called back due to a holding penalty, one of their three in the game.

After a Charles Henderson punt, the Wildcats would quickly drive down the field and take the lead, 14-7, with 2:12 remaining in the half.

On the opening drive of the third quarter, quarterback Joe Bradley hooked up with Robert Lee for a 38-yard strike to knot the game at 14-14.

Seemingly mirroring the Trojans, Enterprise once again responded quickly with a 37-yard touchdown pass of their own.

The intensity level spiked on the next Trojan drive as a player from each squad was ejected following a scrum in which punches were thrown. An Enterprise player, after making a tackle that removed the helmet of a Charles Henderson player, threw a shot into his opponent’s face. Upon a retaliatory shove, both players were ejected.

The Trojans would put together a nice drive to move to the Wildcat 11. On fourth and two Fountain elected to call on his field goal unit. Salmon booted a 28-yard field goal to bring the Trojans to within four, 21-17, with 7:49 remaining in the contest.

“We had a nice drive to get us down the field,” Fountain said. “I wanted to make sure we got points.”

Enterprise quarterback Rhett Harrelson broke off a long run on their next possession which set up a Wildcat field goal at the 4:46 mark in the final quarter.

Charles Henderson would throw an interception at the Enterprise 35 sealing the game for the Wildcats. The Trojans did, however, regain possession late but ran out of time.

The Trojans will make the trip to Marengo County to face Demopolis High School for the first time in school history.

Demopolis is 6-4 overall on the season and 6-1 in region play.