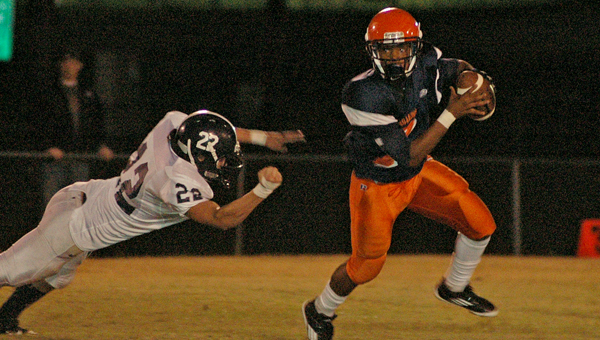 No, this wasn’t a battle of two NFL behemoths duking it out but it sure felt like it.

Charles Henderson and Enterprise traded punches for four rounds and in the end needed more on a cool night in Troy.

CHHS topped the Wildcats 34-32 in overtime Monday in the final junior varsity matchup for both squads.

The Trojans scored on an 11-yard pass from Austin Ingram to Courtney Hooten and Josh Crawford ran in the two-point conversion.

Enterprise wasted no time, scoring on their first play in extra time on a 10-yard run. Needing the conversion to tie, Luke Tate stopped the Wildcats quarterback in the backfield to preserve the victory.

The Trojans offense moved down the field with ease in the first quarter but stalled and Enterprise took over on downs.

After forcing the Wildcats to punt, CHHS again chewed up yardage but this time a fumble would end the threat in Enterprise territory.

The Wildcats went to their bag of tricks in the second quarter. On a fourth and five, Enterprise lined up in punt formation. The snap went to the up-back who pitched to the punter as if running a toss sweep. The punter then looked to pass but Patrick Fuller wrapped him up and put the play to an end handing possession back to the Trojans.

Charles Henderson looked to be in prime position to get on the scoreboard but another fumble, this time at the Enterprise 27, put a halt to the drive.

The Wildcats took control on the first play of the series when they connected for a 63-yard touchdown pass. The extra point was good to give Enterprise a 7-0 lead.

Crawford would return the ensuing kickoff 90 yards. The Trojans two-point attempt would fail leaving them with a one point deficit.

One minute later Enterprise was in the endzone again on a 50-yard run. The Wildcats would lead 13-6.

One the Trojans first play after the kickoff, Ingram found Hooten for an 82-yard scoring strike.

Charles Henderson would gain momentum when Josh Noel intercepted a pass at the Wildcat 20.

After a sack, Ingram struck again. This time connecting with Josh Johnson for a 25-yard touchdown. The Trojans led 18-13.

Enterprise scored the lone point in the third period on a 3-yard run with 3:25 remaining to regain the lead 19-18.

The Wildcats looked to put the game away on a 67-yard fourth quarter score that extended their advantage to 26-18.

Ingram would answer with 53 seconds left in the game when he found Johnson on a post route. Johnson bounced off two converging defenders and shook the Wildcat safety en route to a 50-yard score.

The Trojans would convert the two-point conversion sending the game into extra time.

Enterprise would stop the Trojans for a loss on the first play before Ingram and Hooten connected for the eventual game winner.