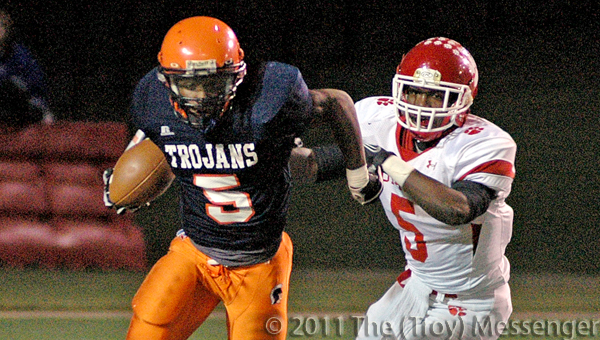 Michael Mauyo recovered a Courtney Downing fumble in the third quarter and returned it 82 yards to give Eufaula the only lead they would need as the Tigers knocked off Charles Henderson 17-9.

The Trojans, who fall to 5-4 overall and 5-2 in region play, are a lock for the third seed in Class 5A Region 2 and will travel to Demopolis in the first round of the AHSAA playoffs.

After trading punts in the first quarter, Nathaniel Salmon booted a 32-yard with 29 seconds remaining to give the Trojans an early 3-0 advantage.

Eufaula looked to be on the move late in the second frame. The Tigers snapped the ball from the CHHS 30 and found running room near the Charles Henderson sideline. Anthony Siler, the last man between the ball and the endzone stripped possession from the Eufaula ballcarrier at the 7-yard line to end the threat.

“That was a big play for us,” head coach Hugh Fountain said. “They haven’t fumbled much this season but we were able to force them to fumble the ball a couple of times tonight.”

The Trojans would be forced to punt again and Eufaula would once again be on the move.

The Tigers scored on a 2-yard run from Benjamin Thomas and converted the 2-point conversion to take an 8-3 lead.

Charles Henderson would force another Tiger turnover in the third quarter. Eufaula, again deep in Trojan territory at the 18, ran an option to the right but the pitch was behind the tailback and Salmon recovered for Charles Henderson.

Courtney Downing regained the lead for the Trojans on a 3-yard scoring run. The 2-point conversion failed but CHHS led, 9-8.

The score would hold until the Trojans recovered another Tiger fumble and looked primed to put the game out of reach.

Downing received the handoff to the right but cutback looking to get outside of the left tackle. A Eufaula defender dipped low to tackle Downing, flipping the Trojan running back and sending the ball flying what seemed 30 feet into the air.

Whatever the vertical distance, Eufaula’s defence had plenty of time to settle under the ball and sprint towards a wide open field en route to the endzone.

“We just made too many mistakes,” Fountain said. “We played hard but you can’t turn the ball over like we did and beat a good team.”

The Tigers would add a 37-yard field goal with 5:26 remaining in the game.

The Trojans will travel to Enterprise next week to round out their regular season schedule.

The Trojans are 9-27 all-time against Enterprise and have lost 10 of the last 12 meetings. Charles Henderson did top the Wildcats last year, however, 41-40.